One of the most important events in the gaming industry last year was Microsoft's purchase of Bethesda Softworks for $7.5 billion. Now there are rumors that the Redmond giant is preparing for the next transaction of a similar scope.

Reports of the planned purchases surfaced two days ago, but now have gained credibility thanks to an insider known as Ragnar. He confirmed that over the past months he has received information that Microsoft is preparing to acquire another publisher. Negotiations of this type usually take a long time (in the case of Bethesda it was three years), so we'll have to wait for details, but the purchase should be finalized at the end of this year or early next year. 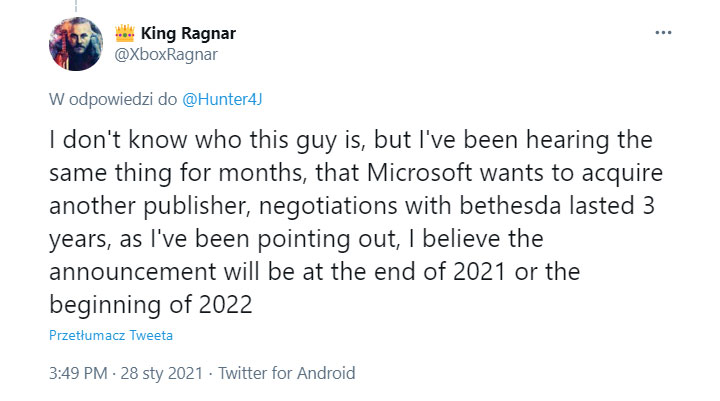 We believe Ragnar, as three weeks before the Bethesda Softworks buyout was announced, he reported that Microsoft was preparing to unveil a major acquisition. His sources proved themselves credible then, so it's likely to be the same this time around.

The company can afford spendings like this because its financial results look impressive. In the last quarter of last year alone, profits were $15.5 billion, enough to buy two companies the size of Bethesda Softworks.

Of course, Microsoft's profits come mainly from sources other than games, but its games division is growing very well, so it's no wonder the corporation wants to invest in it. Revenue from the Xbox department, which includes both sales of games and hardware, as well as gaming services, in the last quarter of 2020 increased by 51% compared to the same three months of 2019.

In particular, Xbox Game Pass subscription is growing impressively. It is currently paid for by 18 million people and about one million new users join every month. The subscriber base of the service may exceed 30 million by the end of this year.

New DLC for Marvel's Avengers to be Revealed Soon

Netflix Announces the Cast of Sandman, Revealing Some Suprising Names