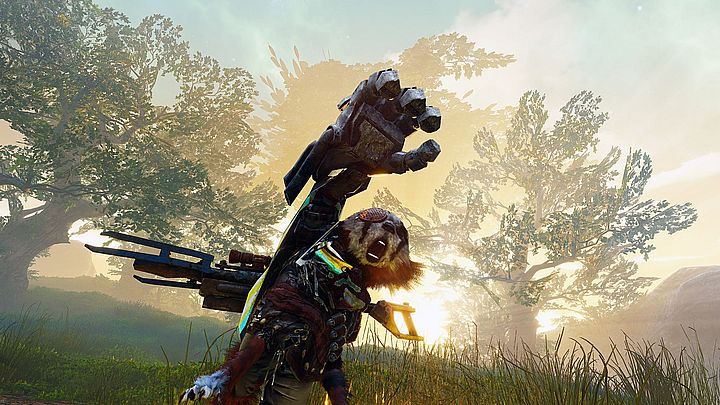 On the GamersPrey channel on YouTube there is a gameplay from Biomutant, published on the on-going gamescom fair. The launch of the title is scheduled for the end of this year, but we still do not know the official date of its debut. Gameplay presents mainly combat, but there were also moments of exploration and allocation of points to particular statistics - after all, the game is announced as an open-world action RPG. You can watch the footage below.

Gameplay starts with the creation of a character. The player can choose the appropriate statistics and the appearance of the hero. Then they are moved to the battlefield, where they have to deal with other enemies. The combat is dynamic and the comic-like pow-pow subtitles accompanying the gunshots draw attention. Despite the fact that the game is supposed to be a sandbox, the first locations look like corridors. During battles, the damage bar is filled (which probably gives bonuses once full). There is also a boss in the form of a giant dinosaur-thing.

The game will have a dialogue system with up to four topics to choose from. We will be able to travel around the world using a huge bubble. It is worth mentioning here that it is the exploration and locations that look most interesting. Combat, however, despite the fact that there is a lot of it, looks rather chaotic and it is difficult to distinguish specific mechanics, which would set it apart from other games.

The plot of the game is set in a post-apocalyptic world inhabited by humanoid animals and robots. An interesting detail is the narrator who accompanies the hero and comments on their actions on the screen. We will probably find out in December this year if such a chimera has a chance to work out. The game will launch on PC, Xbox One and PlayStation 4.