The idea of NFT, or virtual items available in the form of non-fungible tokens, already has a bad reputation in the gaming community, and this latest scandal is unlikely to change the perception of this technology. The creators of the Minecraft-based project Blockverse first sold NFTs worth 1.2 million dollars, and then closed the servers and fled with the money.

It's important to start by explaining what this Blockverse even is. It's a special server for Minecraft, where players playing in PvP were to gain NFTs and thus be able to earn on the game. Access to it was granted only to people who already had at least one token.

Interest in the project was enormous. 100,000 NFTs were made available in the initial pool, each costing about $124. They were all bought up in just eight hours from the start of the sale.

A few days after the launch of the sale Blockverse was shut down. Its official website and Discord server were also deleted and the creators went off the radar, which was seen by everyone as proof that the whole project was a scam. 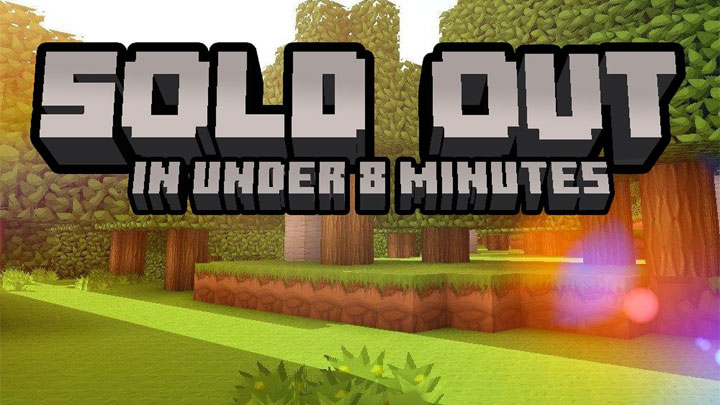 Blockverse tokens sold out in just eight minutes, which shows how much interest there was in this project.

Blockverse creators defend themselves against scam allegations, but are unlikely to convince anyone

After a few days of silence the creators of Blockverse have finally spoken out. They explain that their project was not a scam. They intended to continue developing it, but rising energy prices, insufficient server bandwidth and increasing player demands made them panic.

The developers claim that they are disappointed with the accusations. This is a ridiculous statement, because it is hard to imagine any other reaction of players to what Blockverse's creators had pulled off.

In addition, it was announced that there are plans to transfer the server and the entire infrastructure to another developer. According to the creators this is to guarantee the operation of Blockverse, but it looks more like an attempt to shift responsibility to another entity. What is worse, the organizers intend to keep all the funds obtained during the first token sale.

Blockverse developers may be afraid of the consequences

The fact that Blockverse creators took the floor is unusual in that with most NFT scams, the organizers of the scam vanish into thin air. In this case, however, that could prove difficult. This is because the people who invested in this project have access to data from Coinbase, a cryptocurrency exchange service, as well as IP addresses.

So it is possible that the creators of the project, after realizing that they are not anonymous, decided to hand it over to another developer in order to avoid responsibility.

The community that has invested in Blockverse is willing to go along with the plan, but only on the condition that the creators donate part of the funds obtained from the token sale to finance the project's further operation.

Creators of Blockverse have gained 500 Ethereum, and the community wants to recover 250-400 ETH from it, which would still leave the organizers with a considerable sum, but so far this offer has not met with a response.