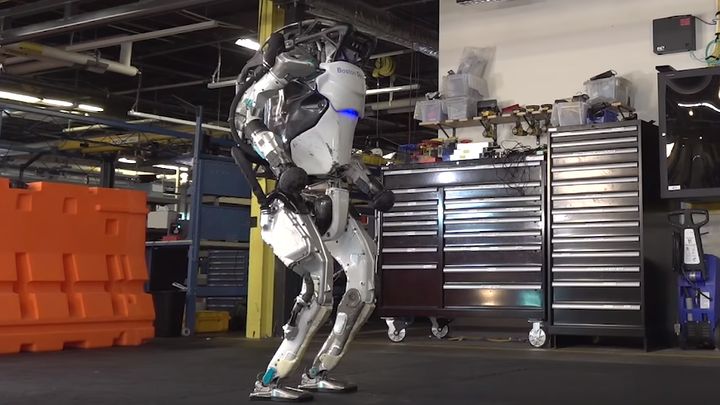 The Atlas is picking up steam.

Do you still remember Boston Dynamics, a company whose creations can manage a warehouse on their own? If not, it is worth remembering this name, because the company has just presented new capabilities of its other creation - a robot called Atlas. It can perform manoeuvres that many gymnasts would not be ashamed of. Okay, I'm exaggerating - it performs relatively simple rolls and jumps on the level of an profficient elementary school student. But that doesn't change the fact that this is a hell of a feat in the case of a machine.

The Atlas is a complex construction consisting, among other things, of advanced motors and hydraulic joints. The robot uses a modern, "anticipating" controller that allows it to smoothly move from one action to another. The machine is 1.5 meters high, moves at the speed of a marching man and weighs 80 kilograms.

Boston Dynamics also informed that its other product - Spot, a robot which resembles a (very strange) dog - was put on sale. Persons (or rather corporations, as they are supposed to be the main customers) interested in purchasing can contact the appropriate department. Unfortunately, the price has not been made public, but you can expect that the robo-pooch costs quite a bit of money.

Back to Atlas, however, it is worth noting that five years ago it was considerably challanging for the robot to... walk on uneven terrain and climb stairs. In 2017, it was shown how to it makes a single roll. As you can see, since then its capabilities have increased significantly. If you are interested in the continuation of this story, you can find answers to some questions in the recently announced Terminator: Resistance from Teyon.