Microsoft's concluding acquisition of Activision Blizzard has caused a lot of speculation among the gamers. Some expected the imminent inclusion of new games from the Call of Duty series to the Game Pass library.

However, it seems that we will have to wait a long time before these titles actually appear in the service on the day of release. All because of the contracts still in force.

New CoD in Game Pass only in a few years 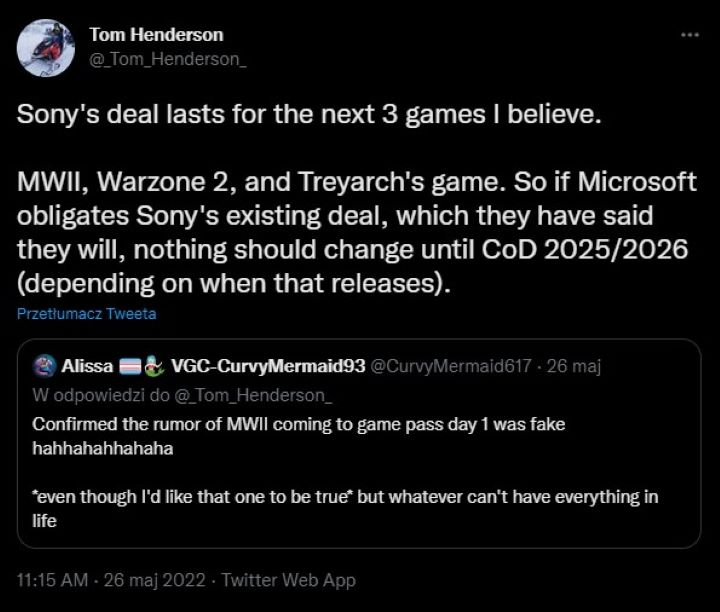 According to a well-known informant Tom Henderson the Call of Duty brand is still bound by a deal with Sony. It is reportedly including three games. This would mean Modern Warfare 2, Warzone 2 and a yet unannounced game by Treyarch.

The deal is related to the overall prioritization of PlayStation as the main console for CoD. It includes exclusive content and special offers, among other things.

During its term, it is therefore extremely unlikely that Microsoft will be able to bring upcoming productions to launch in Game Pass. Only after the expiration of the contract such an option will be possible.

And when will it actually happen? Given that the year 2023 will be lack the release of a new CoD, the three upcoming games should debut in consecutive years until 2026.

However, Tom Henderson points out that the release schedule of the games could be more condensed. If this is the case, the deal would not culminate until 2025 at the earliest. That's when the brand could start being a Microsoft exclusive series.

What about the old CoDs?

The issue of older installments Call of Duty, however, presents itself differently. It is doubtful that they will also be protected by some kind of agreement with Sony.

Most likely, Microsoft will be able to feed the Game Pass library with titles from the series that have their debuts long behind them. Of course, this would mean a really significant strengthening of the service's portfolio.

If you would like to play the older installments of the series, then perhaps the completion of the Activision Blizzard acquisition will give you a good opportunity to do so.

The World's Biggest Video Game Archive is Being Created

Not Just State of Play; Sony Will Also Appear at Summer Game Fest in June