One of the developers using the pseudonym Unerde spoke on censorship of Commandos 2: HD Remaster in a dedicated discussion on Steam. As he wrote, "there will only be one version of Commandos 2 HD Remaster internationally, and it will not incorporate any symbols, portraits, speeches or other assets that could break the law in many countries.. The reason for this is to ensure the 'best possible impression' among the players and to avoid delays and potential sale bans in individual countries, which could lead to unnecessary divisions among players. In one of his subsequent statements, however, the creator stated that the developers "do not force anyone to buy the game", and the removed symbols "have no impact on gameplay", because Commandos 2: HD Remaster is a video game and not "historical documentation of World War II". Thanks for the heads up, Dead Men!

At this point in time, there is nothing but to recall that Patrick Söderlund of Electronic Arts presented a very similar position at the time, referring to the charges against Battlefield V. Although eventually that game was successful, its publisher was still not satisfied with its sales results.

Tomorrow (January 24), Commandos 2: HD Remaster, a re-mastered version of the iconic tactical strategy from 2001, will debut on Steam. Closed beta-tests of the title showed that the team at Yippee! Entertainment, responsible for its preparation, decided not only to improve the graphics and the game itself (modernize the interface and prepare a new tutorial). As it turns out, in comparison with the original, the game was censored and made more "polite".

Before we move on to discussing the problem, is also worth noting that it will appear on PlayStation 4, Xbox One and Nintendo Switch in the spring.

As you can see in the above video, which comes from the aforementioned beta version, the first symptom of censorship is the lack of swastikas. This is interesting because even in Germany, where previously the law forbade displaying Nazi symbols in video games, in August 2018 it was allowed to implement "symbols of unconstitutional organizations" (provided that their presence would serve "artistic or scientific purposes" or to present "current or historical events"). Commandos 2: HD Remaster, as a title whose action was set during World War II, fits this definition. So what was the purpose of that particular censorship?

However, this is not the end of the story, because in this beta version we will also not find symbols of the Japanese Empire. Interestingly, the "problematic" symbols have not been replaced by others, but removed - planes from the Land of the Rising Sun lack national markings, German soldiers wear simple armbands on their shoulders, and in Nazi buildings we will find only "naked" blood-red flags. What's interesting, in the game we won't see any animation of burning opponents after using a flamethrower. We should also not forget that the devs of the remaster will deprive us of the cooperation mode that was available in the original. 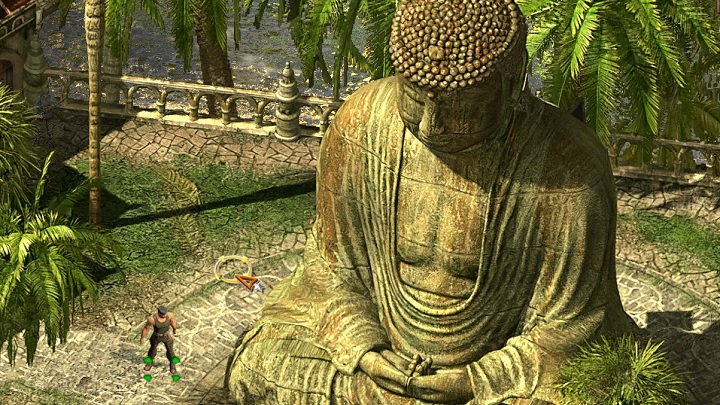 A monument to Buddha despairing on the fate of the re-mastered Commandos (2020, dramatized).

It is currently unclear whether the situation will change in the full version of the game. If not, it is safe to say that the team responsible for the remasterr of the second Commandos has definitely overdid it to appeal to as many players as possible.