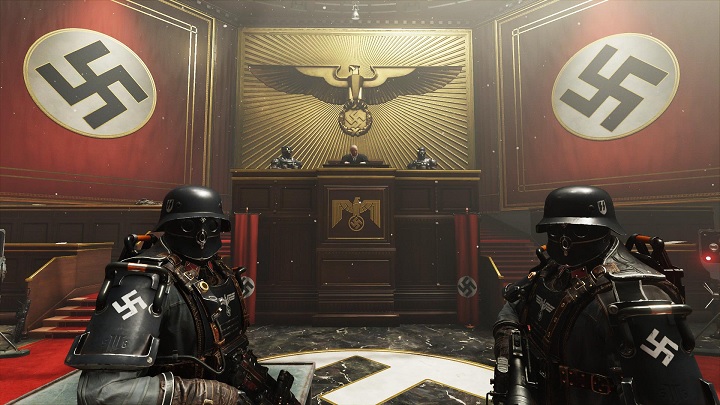 This is not the international release of Wolfenstein 2: The New Colossus.

Video games released in Germany can now display unconstitutional symbols, German Games Industry Association ruled. Together with Selbstkontrolle (or USK for short, Germanys PEGI equivalent), the Association released an official statement regarding the matter. What this means can be boiled down to one sentence: swastikas, SS-symbols, Hitler representations etc. can now be shown in games like Wolfenstein 2: The New Colossus and need not to be censored in German releases. So far this was not the case  and there were a few reasons for that.

The rules are simple. Articles 86 and 86a of the Strafgesetzbuch (German penal code; StGB for short) prohibit the dissemination of anti-constitutional propaganda and symbols. Basically, if the words you speak, actions you perform or symbols you display have anything to do with National Socialism (ideology fueling the Third Reich during World War II), youre up for prison, no questions asked. To goal is to prevent Nazism and right-wing extremism from spreading and re-surfacing in Germany anytime in the future. Most German players are familiar  and OK  with it.

But heres the catch. The "social adequacy clause" in article 86a paragraph 3 allows the use of the symbols if they have to do with "spreading civil enlightenment; averting unconstitutional aims; promoting art or science, research or teaching; reporting about current historical events or similar purposes". 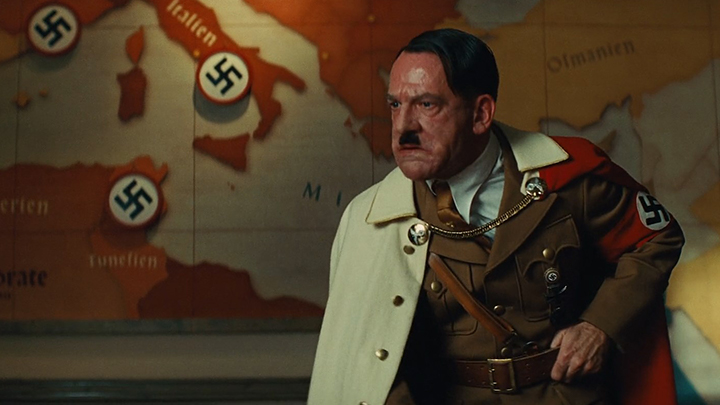 Movies are an art form, so Tarantinos blockbuster movie Inglourious Basterds (2009) was praised  not censored  in Germany.

Almost every informed media user knows that as long as the representation takes place in the cultural or artistic context, and serves no propaganda or similar purposes, the social adequacy clause does not apply. That is the case with books, movies, art exhibitions, plays but not with games. Because so far, games in Germany were not considered an artistic medium. How so?

Until 1998, games depicting unconstitutional symbols in Germany were pretty much samizdats. Some made it to the stores without cuts, some  like Lucas Arts' Indiana Jones  were self-censored. Still, Germanys Federal Department for Media Harmful to Young Persons (BPjM for short) could put any game on the Index, which meant that they could not be sold, made available to minors, or advertised in any form, because they were harmful to the public in one way or another. 1992 Wolfenstein 3D was put on the Index in 1994, but surprisingly, not because of its depiction of swastikas or other Nazi symbols. Instead, it was simply too violent overall. The decision reads:

The decisive factors for the indexing were the inherent glorification of the idea of vigilante justice as well as the sarcastic design surrounding death and suffering. 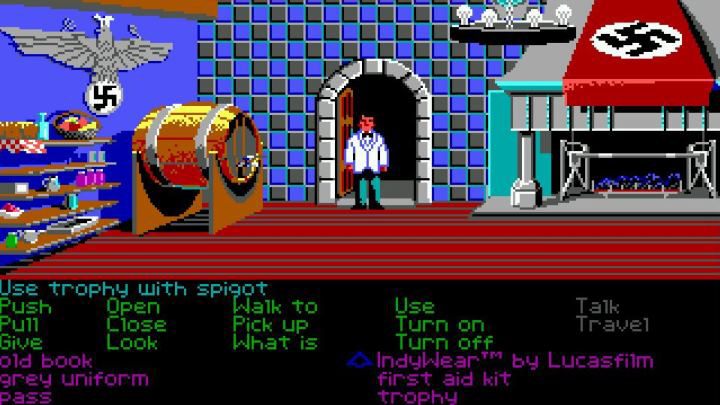 But everything changed in 1998. After a historical court decision made by the Higher Regional Court of Frankfurt, the Wolfenstein 3D case was reevaluated, this time according to article 86 of the StGB. The court made clear that games cannot display unconstitutional symbols in any form, and whether games met the definition of the artistic medium or not was not examined. Once again, if they did meet it, the 3rd paragraph of article 86a would take effect, rendering games as harmless to the public as movies or non-fiction books depicting Nazism.

The USK (Germanys PEGI) then changed its guidelines: by default, games couldnt meet the social adequacy requirement (thats paragraph 3), so any title displaying Nazi symbol was indexed (taken down) right away. In 2001, when Return to Castle Wolfenstein made its debut, both violence AND the appearance of unconstitutional symbols were decisive for the indexing. And so it went  up until now.

Two recent cases helped with bringing the swastika back to play. First  The Bundesfighter 2 Turbo case. The game  a pixel fighter allowing you to control Angela Merkel, the German chancellor, among other Bundestag (German Parliament) politicians  displayed the swastika, but was not banned, and won the court battle. It was judged that the 1998 decision of the Higher Regional Court of Frankfurt was out-of-date. 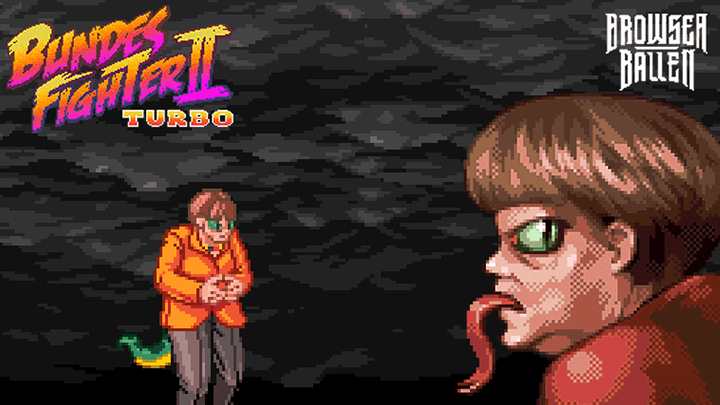 This depiction of Angela Merkel was not what almost got Bundesfighter 2 indexed. It was the swastika.

Then Attentat 1942, a game-documentary depicting Nazi occupation using the Czech survivors point of view, won the Most Amazing Game Award at the German A MAZE Indie Games Festival and remained banned in Germany because of its use of Nazi symbols.

This was the final straw. It took less than 4 months for the interpretation of the law to change. USK then released the aforementioned statement, altered its guidelines once again, and just like that  here we are. In the Germany of today, Hitler can have his moustache back, and the swastika is rightfully portraying the past.

And so, in addition to the age check, games are now also subjected to a social adequacy check and evaluated accordingly. This applies to new titles, but publishers can also submit older games and make the original version available in Germany. 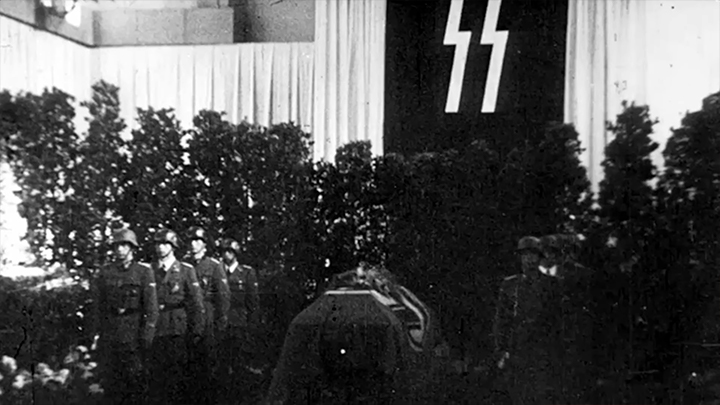 Such frames from in-game cutscenes got Attentat 1942 banned.

Lastly  the rulebook is still in play

Naturally, some restrictions remained in place. Games are still indexed if they:

Nevertheless, the change in the examination procedure is an important step towards equal rights for video games in Germany. In the coming months, well see just how many developers request a re-release of their game  and how many of them succeeds.

Multiple Diablo projects are in the works, Blizzard says