At the end of June, CD Projekt RED confirmed that Cyberpunk 2077 will not enable us to customize our cars. Instead, the devs prepared a number of pre-modified versions of selected cars so that everyone could find something for themselves in their cyberpunk garage. In the latest issue of 'Official PlayStation Magazine', Paweł Mielniczuk, the artistic director for characters and hard surfaces at CD Projekt RED, shared details of what we can expect from the machines prepared by his team (via AltChar). 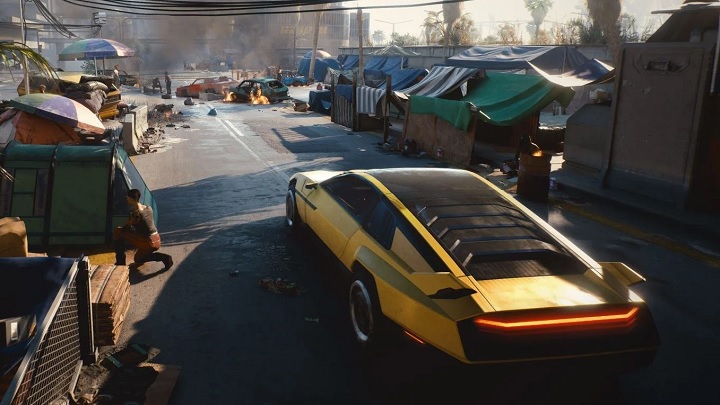 Street kids can afford to leave their windows in the car. But in the wasteland such luxury can cost your life...

Let's start with the fact that there are about 29 basic car models in the game. However, individual cars will come in different varieties; these, in turn, are expected to vary greatly depending on who tuned them.

It is worth noting that the diversity of cars will concern both their appearance and behavior on the road as well as protection for drivers. An example can be the machines belonging to the Nomads, who install in them mine detectors to detect explosive hazards hidden in the wilderness. In addition, we will not find any windows in them, because, as Mielniczuk says, 'infrared and so on' was installed in them. Yes, safety first, but how can people even drive them while sitting inside? As Mielniczuk says, the solution is 'crystal dome' technology. Under this enigmatic term, there is nothing else but LCD screens imitating glass, where the picture is displayed; their switching on is to be accompanied by a pleasing to the eye and ear effect of materializing a kind of virtual windows.

As a reminder, on November 19, 2020, Cyberpunk 2077 will launch on PCs, PlayStation 4 and Xbox One; the game will also be coming to PlayStation 5 and Xbox Series X.