Do you miss the Burnout racing series? If so, we have good news for you. Known from the Danger Zone series, Three Fields Entertainment studio has announced that their spiritual successor to Criterion Games' crazy productions, Dangerous Driving, will be released on PC, PlayStation 4 and Xbox One on April 9th this year. If you are interested in buying the game for the PC, please note that it will be exclusively available via the Epic Games Store.

Dangerous Driving comes with a price tag of $29.99. Below, you can see a new trailer of the game.

If you want more, you can always watch fragments of gameplays, as well as the short, three-part Behind the Scenes series! It features some details about the production of Dangerous Driving. All parts are available below.

As you can clearly see on the attached fragments of the gameplay and the trailer, realism in Dangerous Driving isn't quite the most important thing. But there is no shortage of dizzying speeds, boosters, drifts, long jumps and spectacular crashes  exactly as befits the spiritual successor of the Burnouts.

The title will offer several competition modes - from classic races, through police chases, to a kind of battle royale, in which the winner is the last vehicle on the route. You can play with AI-controlled enemies on your own, as well as face players from all over the world on the Internet. 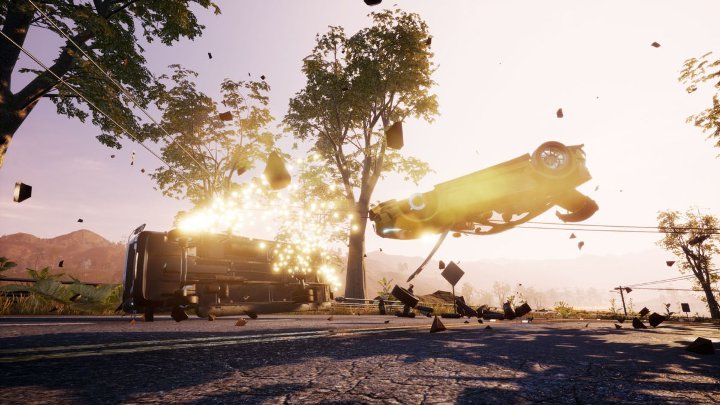 Car crashes can be thrilling, but but only if rendered by your GPU.

According to the developers from Three Fields Entertainment, Dangerous Driving is the most ambitious project they have ever worked on. Of course, this does not have to be reflected by the quality of the final product, but the presented screens look promising. It is possible, therefore, that lovers of crazy, spectacular races and exchanging paint with other cars will be in for a treat in April.