Despite the fact that Dishonored 2 was one of the bigger E3 announcements, very little has been said and shown concerning the game. Luckily, developers from Arkane were kind enough to share (on Game Informer among others) some additional information concerning the sequel to the first person stealth/action blending game which in 2012 unexpectedly became one of the most prominent treasures among Bethesda Softworks titles.

Other learnings about Dishonored 2:

Although the game will allow us to choose beetween two playable characters, we begin our adventure in empress Emily Kaldwins shoes. The prologue will be a dynamic sequence showing how she is stripped of her rule by an usurper and forced to flee Dunwall as a fugitive to finally make her way to Karnaca  capital city of a southern, island country of Serkenos. Only then will we be given a choice to continue playing as her or make her switch places with Corvo Attano  the protagonist of the first installment.

Each protagonist will have different powers at his (or her) disposal. The creators have designed some new powers for Emily i.e. Far Reach, Shadow Walk and Mesmerize. For now, Far Reach is the only one we know something about  it works similar to Corvos Blink power but it wont hide the character from her enemies while she pulls herself to a new position (in other words it may look more like a grappling hook assisted jump rather than teleportation). Additionaly, the female character will be given the ability to craft Bone Charms, which already appeared in previous installment. And they possess an impressive number of 400,000 possible, varying effect combinations. 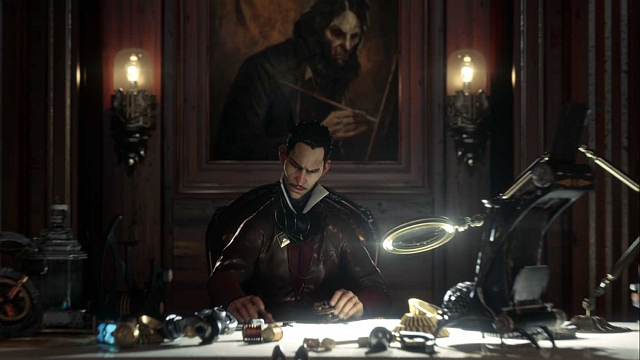 It seems that this guy  the anti-hero from the first trailer - will find himself on the players hitlist in the course of the game.

The decision we made picking a character will be final  there will be no option to switch between them throughout the game. Both characters will face the same missions but from a different perspective. Right now it is not clear what it means, but we can expect at least some differences in objectives and/or paths available in game locations. And since both protagonists will have prerecorded dialogue lines, we can assume there will be some changes in dialogues as well.

Furthermore, the creators have noticeably enhanced technical aspects of the game, which means more than just better audio visual effects. Similarly, the NPCs AI will be refurbished. For example, guards searching for the player will be given new search patterns  they will be more persistent and may split up to cover more ground in different areas.

And finally, Dishonored 2 is set to launch In spring 2016 on PC, Xbox One and Playstation 4. More information, and, hopefully, first footage showing the game itself, will be presented at Gamescom on 5-9 August 2015 if not earlier.