A few days ago, Techland caused quite a stir by boasting that it would take at least 500 hours to complete Dying Light 2 at 100%. This caused such reaction that the devs decided to clarify this information.

First of all they assured that completing the main storyline of the campaign will take only about 20 hours. The game will offer a lot of freedom, so some players will finish Dying Light 2 a bit faster, while others will spend more time in the game.

If we want to complete every side mission, we will have to prepare ourselves for about 80 hours of fun. This is also an estimated number, which may change depending on the preferred style of play. 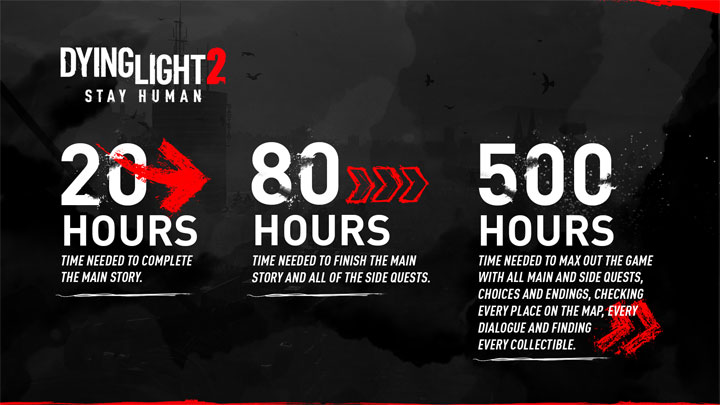 On the other hand, the previously quoted 500 hours applies only to those people who want to complete the game in 100%. This includes not only completing the campaign and side quests, but also checking out every possible story choice, reaching all the endings, visiting every corner of the world, and finding all the collectibles. In other words - after about 500 hours we won't have anything left to do in Dying Light 2.

This information is not a surprise. No one sensible thought after the previous announcement that just completing the story missions and side quests will take half a thousand hours. Nevertheless, it's good that the devs specified how much the game will last in different scenarios.

Let's recall that Dying Light 2 will be released on February 4, 2022, simultaneously on PC, PlayStation 4, Xbox One, PlayStation 5 and Xbox Series X/S. Nintendo Switch owners will also be able to play the project thanks to streaming technology.

Halo Infinite - Prices in the Games Store Will Be Lowered