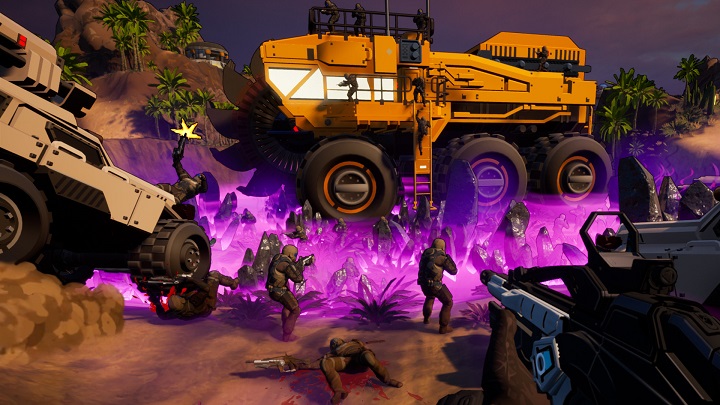 Earthbreakers is supposed to be oriented on teamwork.

Former developers from Westwood (since 2003 working at Petroglyph), who several years ago were responsible for the developement Earth and Beyond and games from the Command and Conquer series, announced a new multiplayer game,Earthbreakers. The title is to be a combination of a team FPS and RTS, and, according to the devs themselves, a spiritual successor to Command and Conquer: Renegade. The release is scheduled for 2020 and the game can already be added to wish lists on Steam.

In Earthbreakers together with our team (up to 32 players) we will have to collect special resources on the map, which will enable us to expand the base. Each upgrade will unlock new vehicles and character classes. We will be hindered by an enemy team with the same objective. The main goal of the game will be to destroy the opposing camp. We will be able to defend ourselves against attacks on our base by e.g. building walls and defensive towers.

Initially, two factions will be made available, and each of them will be given access to 12 character classes. The most powerful ones will be unlocked only after we build appropriate structures (11 in total). The players will also have 6 different vehicles at their disposal (plus a resource harvester). There will be several maps in the game on which the duels will take place. We have also learned about the the game's hardware requirements, which you can see below.