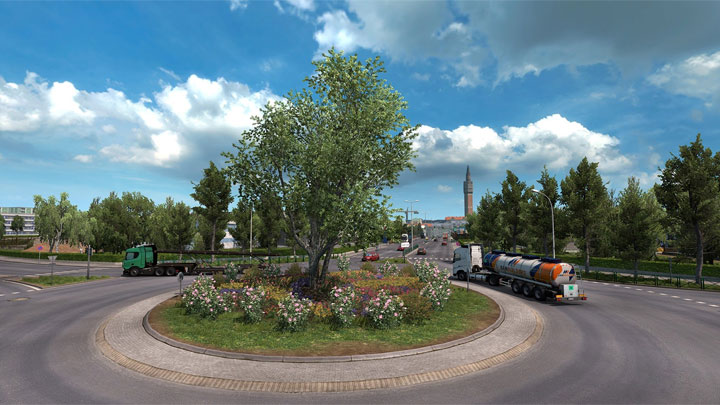 SCS Software has started the open beta of patch 1.38 for Euro Truck Simulator 2. The update brings a lot of new features and improvements, but those interested should bear in mind that the patch is still not fully polished. If you are not afraid of technical issues, you can take part in the tests via the Steam client. In the Library, right-click on the game and select "Properties", then set "1.38 public beta" in the "Beta" tab. No passwords are required - everyone interested can take part in the open beta.

The update brings, among other things, major changes in the French city of Lille. Its appearance has been improved and the layout of the streets has been changed to be closer to reality. Modifications to the road signs are also introduced. The scenery has also been improved and the vegetation detail level has been increased. The differences are huge, as we can see in the picture below:

At the top, the current version of Lille. At the bottom the version of the city with patch 1.38.

Moreover, after the update, each truck manufacturer gets a uniquely designed showroom. All points of this type in the game world have undergone such a rework.

Update 1.38 also enriches the paint selection system with the possibility of entering codes of specific colors, which makes it easier to harmonize the appearance of the truck park in our company. The interface of the GPS module has also been refreshed, and many visual issues on the entire game map have been improved. In turn, owners of Special Transport and Road to the Black Sea DLC have received three additional routes for non-standard cargo. There were also controls improvements and bug fixes.

Euro Truck Simulator 2 debuted in October 2012. Despite being almost eight years old, the project is still very popular. Yesterday, at the hottest moment of the day almost 37 thousand players were playing the title at the same time.

Microsoft: Perfect Dark and Fable Twitter Placeholders are Nothing Big