We suppose no one interested in Taleworlds' Mount & Blade II: Bannerlord needs to be told that the title is still in early access and will probably stay there for a long time. Nowadays, the creators have focused on patching the game, rather than adding new content. This is where the modders come in, competing in the implementation of new content to increase the comfort of the game. However, we still haven't seen any great projects, those that would shake the foundation of mechanics and game world - like their predecessors did. It seemed to be too early for that. However, A Twist of Fate, a modification that takes us to Westeros, the realm known from Game of Thrones, is here to blaze a trail. 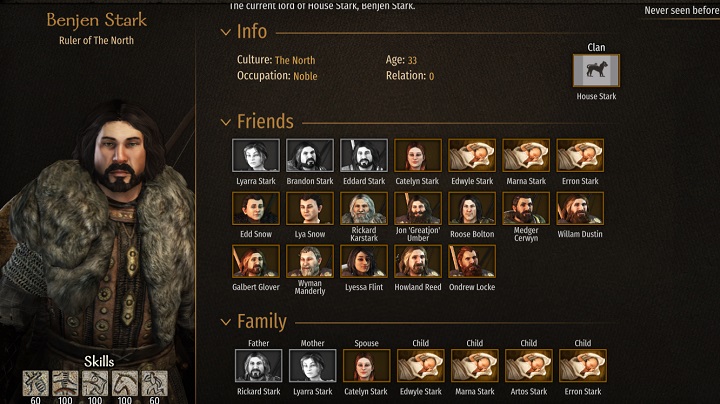 As we can see, House Stark is growing. Source: Shadowclaimer2

The mod is free of any spoilers from books or films as it focuses on an alternative story. In the world of A Twist of Fate, Robert Baratheon does not succeed in his rebellion against the Targaryens - he is killed by Rhaegar Targaryen. The mod's creator, Shadowclaimer2, states that his work will be free, or almost free, from manifestations of magic, and that the gameplay will be based on fighting between 7 kingdoms and cultural differences between the factions.

However, players expecting the full experience will be disappointed. The mod is still being created and new content is constantly being added. The work continues, but it is far from finished. The author himself admits that many of the character models are temporary due to the ever-changing nature of the game itself. Those expecting to travel across Westeros will also have to wait, because until the developers provide advanced mod tools, the land will remain Calradia with changed place names.

The ambitious mod has caused a lot of enthusiasm among the fans of the game, but also fear. Some Reddit users are worried that the work put into such a big project could go to waste with the game's updates.

We have no choice but to wait for A Twist of Fate to develop. We probably won't see the final version until Mount & Blade 2: Bannerlord leaves early access. However, fans of Game of Thrones can already add this mod to their observed list.