During his performance in Animal Talking, Danny Trejo expressed his desire to play in Star Wars: The Mandalorian. Gary Whitta, the scriptwriter responsible for such films as Rogue One: A Star Wars Story, promised to help him get the role.

Unconfirmed information about next free games to be made available on Epic Games Store has appeared on the web. A leak of unknown origin informs about three upcoming titles, the first of which is to be Sid Meier's Civilization VI.

Modder Razed presented NaturalVision Evolved, another version of the visual mod for GTA V. Work on the project is still in progress, but the artist has released a trailer with a comparison of visuals.

CD Projekt RED has announced that Cyberpunk 2077 will enable us to drive car inspired by Mad Max: Fury Road.

Microids announced a game based on the license of the iconic Smurfs. We will return to the world of French comics in a three-dimensional action game in an undefined future.

Christian Dailey from BioWare Austin spoke about the planned changes in Anthem. The developer left no illusions - we will wait a long time for modifications to give the game a second youth. 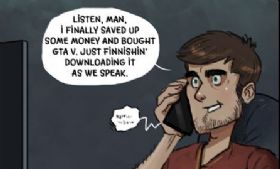