We finally lived to see version 1.0.0 of the project FreeCol, an open-source F2P strategy game that remakes the iconic Sid Meier's Colonization from 1993.

Getting to this point was an exceptionally long path for the authors - because the release of version 1.0.0 took place exactly on the 20th anniversary of the release of the first edition.

FreeCol is a turn-based strategy that enables you to attempt to colonize America. The game begins in 1492, and we start with one ship and a handful of settlers. The game is very extensive and you can easily put several hundred hours into it without feeling bored. 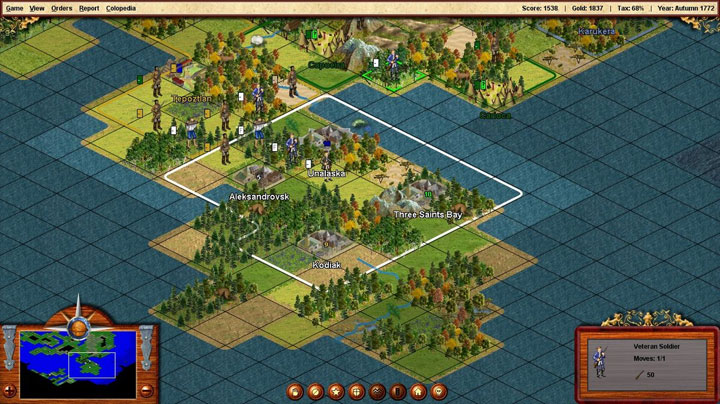 In terms of interface and visuals, the authors modeled the game on Civilization 3. Source: FreeCol Team.

Importantly, while the creators have remained faithful to the mechanics used in Sid Meier's Colonization, they did not slavishly stick to its solutions in other aspects. Instead of just recreating the original in higher resolution, the developers chose a more ambitious approach - in terms of graphics and interface, they modeled their work on the much better Sid Meier's Civilization III from 2001.

Version 1.0.0 of FreeCol brings mainly technical improvements, increasing stability. Some visual elements have also been improved and the AI has been heavily enhanced.

The authors' goal in version 1.0.0 was to faithfully reproduce and refresh the mechanics and content of Sid Meier's Colonization. Now the developers have begun work on FreeCol 2.0.0, which is expected to introduce many new elements and gameplay features, realizing the vision of what a full-fledged sequel to Colonization could look like.

Other fan-made remakes of classic strategies

FreeCol is not the only game of its kind. Fans have developed many free strategy games based on older hits. Worth recommending in particular are:

Is your KSP not launching? - Fixes