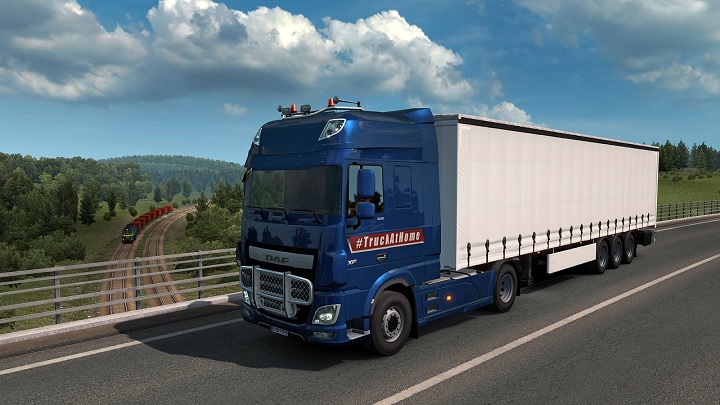 The Czechs encourage to drive in the digital world instead of leaving home.
The most important information:

Subsequent reports confirm our belief that the coronavirus pandemic will not be over soon. However, judging by the recent actions of many governments, some people apparently do not understand the suggestions and recommendations to "stay at home" at most. Game developers, including the Czech studio SCS Software, have more success in convincing the masses to stay in their own four walls. The developer informed that since the beginning of the #TruckAtHome event on April 2, players have driven 460 million kilometers in the popular truck simulators, including 60 million kilometers in just six hours.

The creators decided to celebrate this by giving away free activation keys to American Truck Simulator (Utah) and Euro Truck Simulator 2 (Road to the Black Sea) expansions. This second production also broke an activity record on Steam. On Thursday, more than 55,000 users of Valve's platform were simultaneously playing ETS2, and according to SteamSpy, at some point the game attracted almost 60,000 users.

The rules of #TruckAtHome are simple: complete as many orders as possible, regardless of load size and distance. The only requirement is to have a registered World of Trucks account (see our guide for description and setup instructions). For every 20 million km driven by the users, SCS Software were to give away free Steam keys. What's more, the creators commited to the fight against COVID-19, although details were to be disclosed on an ongoing basis. They kept their word and in the first update, from April 3, they reported that they donated 9.4 thousand euros to people and organizations involved in the fight against the pandemic (including... famous Czech chefs who support paramedics, police officers, etc.). In addition, three Prague developers are delivering cargo to the surrounding hospitals with a company truck SCS On The Road.

SCS Software somehow does not follow its own recommendation.

SCS Software is not the only representative of the industry involved in one way or another in the fight against the pandemic. Recently, numerous developers and publishers have been promoting adherence to the World Health Organization's recommendations as part of the #PlayApartTogether campaign. One could be cynical and accuse them of using a crisis situation to promote their productions, but in the case of the Czech studio, one would really have to try to distort the intentions of the developers. The #TruckAtHome campaign will last until April 7th until 1:59 am, and until Monday 7:00 pm you can buy games and selected expansions from SCS Software on Steam even 75% cheaper.