Grand Theft Auto IV is already years old, and yet it still gathers a crowd of fans and modders. A group of the latter have been working for some time on a huge project called the Definitive Edition. The project encompasses packages of mods for most Rockstar games (among others. GTA: San Andreas, GTA: The Trilogy or Bully), which primarily refresh the graphics of the originals and fix many bugs. Unfortunately, recently the creators received an anonymous DMCA (Digital Millennium Copyright Act) violation notice, causing them to have to remove modifications to GTA 4.

So far, only this one game has been brought to their attention, but it is feared that a similar fate will soon befall the rest of the titles included in the project. Scared gamers are already downloading all the modifications, just to be safe, so that in the event of the worst, they can be "secretly" distributed over the network. 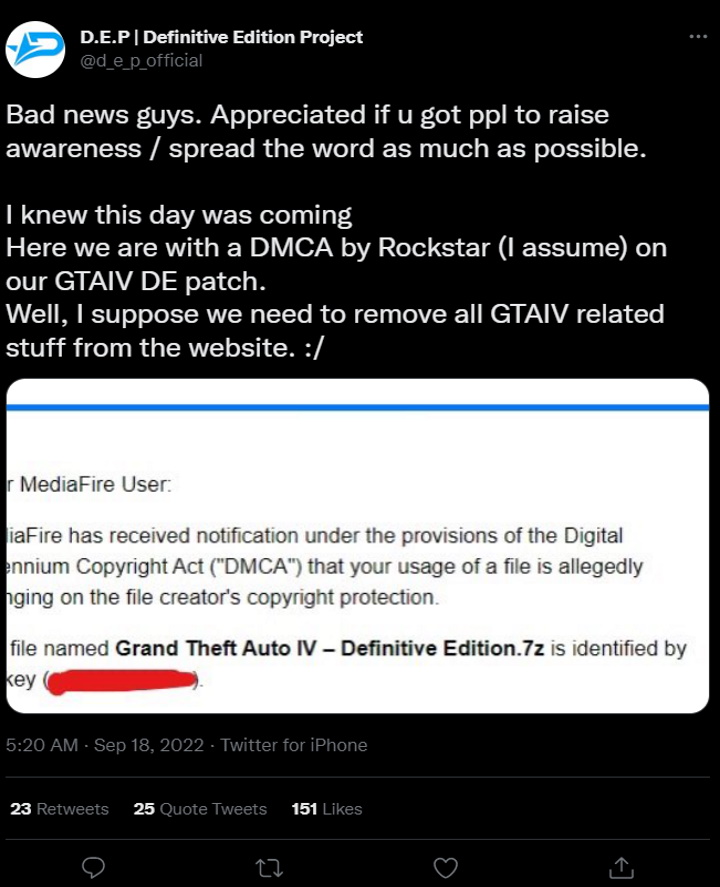 Want a GTA 4 remaster? Make it yourself!

If you want to improve the graphics of Grand Theft Auto IV then we recommend our article about the mods that make it possible. This is a comprehensive step-by-step guide that will show you which projects to install, how to do it and in what order.

Most likely, the company behind the DMCA notice is Take-Two Interactive, owner of Rockstar Games. After all, the creators of Definitive Edition received the note on September 18, which is the same time when GTA 6's massive leak took place. At that time, the publisher removed all materials related to it, and it's possible that on this occasion it began to take a more serious look at the work of fans (again - we've already reported on similar situations more than once in past years). Nevertheless, with such actions the company is discouraging the entire community. And even without this, fans may have a lot to accuse it of, such as poor remastering of games or the removal of original soundtracks.

STALKER 2 May Not Launch Until 2025; Studio in Chaos, Leak Claims