Yesterday we reported on the hacking attack on the Polish company CD Projekt, and it looks like we are seeing its first effects. In a statement to the Polish Press Agency (via Bankier.pl [in Polish]), Adam Kicinski admitted that the situation may affect the pace of the studio's work, albeit in short-term, which is related to the need to restore data from backups. The CEO also confirmed that there was no information among the stolen data that would put players and users of CD Projekt's services at risk.

"The attack affected servers and resources of CD Projekt Group. To the best of our knowledge, no personal data of players or other users of our services was leaked. At the moment we are focusing on investigating the incident, securing the infrastructure and restoring the data which, according to our internal procedures, are regularly backed up. Accordingly, it is too early to assess the long-term effects of the attack. It will certainly have a short-term impact on the pace of our development work," wrote Kicinski.

However, that's not all - a leak appeared on a hacker forum, which apparently constitutes the first portion of the stolen data. It concerns the source code of Gwent: The Witcher Card Game (reports appeared on Cybernews, which deals with broadly defined digital security). It is worth noting that the author of the post, in which the files were made available, has previously contributed to threads dedicated to the Cobalt Strike ransomware, which suggests that he may be the person behind the hack. 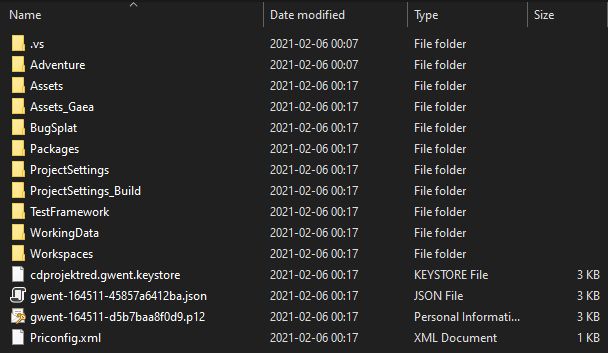 Unfortunately, all signs suggest that the matter won't end with today's leak - another one is likely to happen tomorrow, as indicated by a readme file found among the leaked data. It's possible that company's internal documents, as well as source codes for Thronebreaker: The Witcher Tales as well as ray tracing version of The Witcher 3: Wild Hunt and Cyberpunk 2077 may also appear (this is suggested by another user of the aforementioned hacker forum).

Chinese Steam Launches With 53 Games and No Forum