Hitman 3 will receive new free content in March. IO Interactive released a list of highlights that includes additional missions, fresh contracts, and weapons for Agent 47. The first new feature arrives in the game today, on March 4. It is a mission in Escalation mode called Lesley Celebration. The players will have to get their hands on the specified targets in the party area of a Berlin club. In a week, on March 11, new contracts designed by the devs associated with the Easy Allies website will be coming to Hitman. They will be set on the map of Chongqing.

In the second half of the month, the game will receive a new mission in the Elusive Targets mode. This task, located on Sgail Island, will be available for the players from March 19 to 25. Right after it, Hitman 3 will also receive new contracts, which this time are the responsibility of people connected with Eurogamer. They will be set in the city of Mendoza. 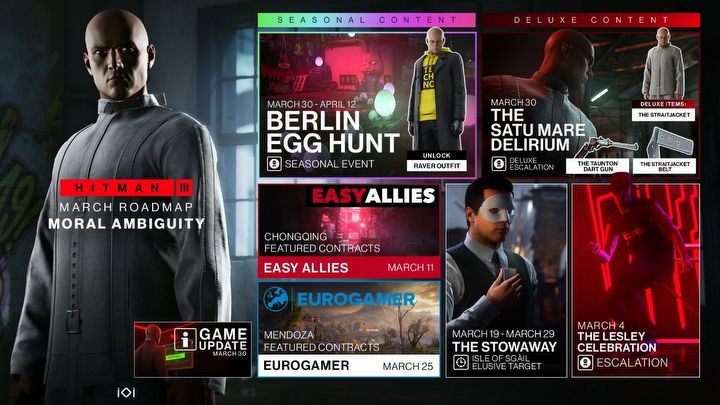 The end of the month will bring two bigger events. Berlin Egg Hunt will be available from March 30 to April 12. As its name suggests, the players will be engaged in the search for eggs on the Berlin map. In addition, the devs have also prepared content for owners of the Deluxe version of the game. They will receive the mission titled The Satu Mare Delirium. In it, Agent 47 will have to escape from a heavily guarded closed facility. Completing the mission will be rewarded with a new disguise and weapons that can be used in other game modes.

Diablo 2: Resurrected Will Support Saves From the Original

25 Minutes of Gameplay From Aliens: Fireteam

25 Minutes of Gameplay From Aliens: Fireteam

Diablo 2: Resurrected Will Support Saves From the Original