Hitman 3 was met with a great reception upon release. IO Interactive's game was praised by both critics and players. Now, however, the situation has changed dramatically. The game is bombarded with negative reviews from users on Steam. There were so many unfavorable reviews on Valve\s platform that currently the game can "boast" only 42% of positive reviews.

Most of the outraged players take up in their comments the topic of the studio's pricing policy, which is supposed to be very unfavorable to players. Despite the fact that a year has passed since its release on Epic Games Store, the game is sold on Steam at full price. Moreover, it is available in many editions, which, according to some players, have not been properly described. Thus, some users make unnecessary purchases because they are not familiar with the rules of Access Passes. 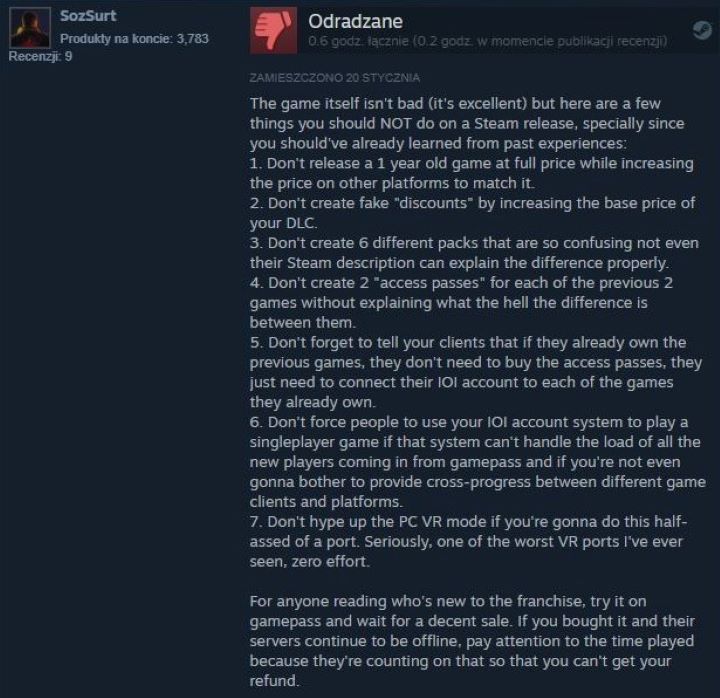 The VR mode is also supposed to be in a very bad state, being riddled with bugs and glitches. Some players even stated in the comments that they were unable to complete the tutorial due to the numerous bugs. For many, this is the worst VR port they had the opportunity to play. At the same time, fans complain about the lack of promise to improve the aforementioned shortcomings in the future.

In addition, the game has problems with servers. The influx of new players, associated with the release of the title on Steam and in Game Pass, exceeded the technical capabilities of IO Interactive. As a result, many people are unable to even start the game. To do it, we need a permanent connection with an IOI account.

It remains to be hoped that with time all the aforementioned problems will be solved. The biggest question mark is the price, which the developers will most likely not give up so quickly. People who do not want to spend such a large sum of money, however, can test the game in Game Pass.

Work on Lego Star Wars: Skywalker Was a 5-year Crunch