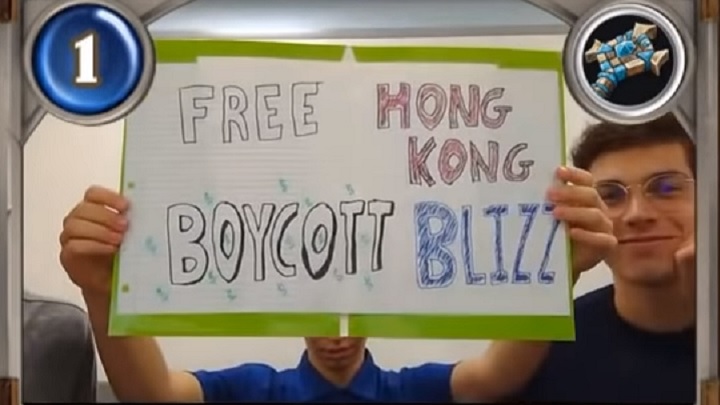 The AU Hearthstone team in almost all its glory: Casey Chambers, Corwin Dark and TJammer (inb4 that's a nickname). And the famous banner. / Source: Blizzard.

The six-month suspension penalty was imposed on the competitors representing American University in Washington at the Hearthstone Collegiate Championship, who on October 8, in solidarity with the suspended player blitzchung and the protesters in Hong Kong, after losing a match with the Worcester Poly team, displayed a certain banner (see above) in front of the camera.

For more than a week, Blizzard did not react in any way to their expression of civil disobedience, which, by analogy, should also have been regarded as a breach of the rules. Three 19-year-olds: Casey Chambers, Corwin Dark and TJammer, when asked about their comments by Polygon, explained the situation in this way:

"We have not heard anything from tournament admins since the match  which raises questions about how Blizzard intends to apply their standards  but we still expect some form of sanction. However, we believe that the risk we face is nominal compared to what people in Hong Kong have to deal with. [...] We knew from the moment we saw the news that the Hearthstone community, as well as the gaming community in general, would not accept Blizzards decision to support authoritarianism. We acted not only due to our own beliefs, but to represent the dissatisfaction felt by everyone."

Blizzard's crisis staff must have had a lot on their minds at the time - it was the climax of the boycott. Therefore, an ad hoc measure was taken and the use of cameras in university tournaments was banned, as well as interviews with the winning teams. The decision, apparently, remains in force until further notice.

Yesterday, however, the team received feedback from the tournament admin, which Casey Chambers announced on Twitter and provided screenshots with the suspension decision:

In the message we will not read anything new - justifying the decision, the organizers refer to the rules and regulations, and also point out that while the corporate values apply ("Every Voice Matters") during official broadcasts everyone must feel welcome, so this is not the right place for unrestrained expression. This is largely in line with the official position of the company's president, Allen Brack.

In the "Rulings" tab on the esports page (here) you will find the official public position on the matter.

While by now, probably all of you have already made up your mind about all the commotion (including the decision described here), Blizzard could not have done otherwise. Ignoring the actions of AU Hearthstone would only confirm that from the perspective of the giant indeed not everyone is equal.

At the beginning of the month, a professional Hearthstone player blitzchung, who comes from Hong Kong (where pro-democratic protests have been ragind for the last four months), appeared in a gas mask during an interview after winning his final match in the Hearthstone Grandmasters tournament and shouted the slogan of protestors about liberation of Hong Kong and revolution. The commentators that were to interview him were fired, and the competitor was suspended for one year and deprived of the prize money for the entire season. After the storm that Blizzard's decision caused in virtually every industry group - from players to corporate employees, not to mention the Internet - all the penalties were reduced to six months' suspension, and blitzchung regained his prize. Resistance in the form of boycott (and memes) is still present, however, and business relations between the corporation and China (represented in the entertainment industry by Tencent) have also appeared in the wider public consciousness.

Google Stadia Controller Not so Wireless on PC and Smartphone