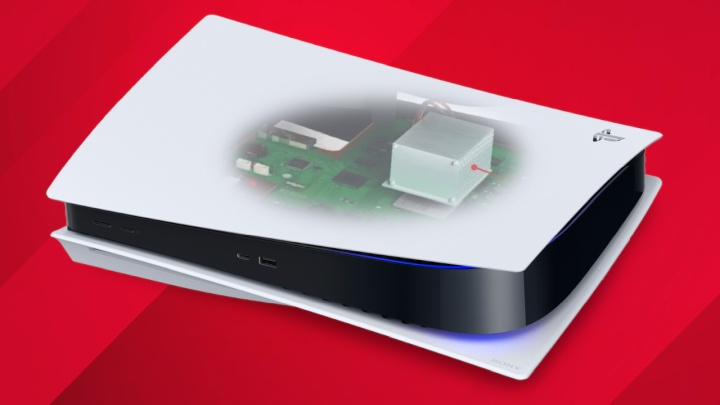 The interior design of PS5 becomes the subject of artistic vision of Adrian Mann
IN A NUTSHELL:

The cooling scheme described here (source: TweakTown) appeared in How It Works magazine and is the work of Adrian Mann. It presents an idea for a heat dissipation system hidden in PlayStation 5's fancy enclosure. It is not based on manufacturer's information but is simply the result of observing the external features of the console in the provided photos.

Adrian Mann is an artist, a continuator of the graphic engineering movement initiated by Chesley Bonestell. He became famous for his many works in the field of space or technical art. His works appear in scientific magazines such as Focus, Spaceflight, or the aforementioned How It Works.

The illustration that was published in the magazine shows what PS5's cooling system could look like. The author assumed a central location of the motherboard and two large fans at the bottom of the case. These are designed to force airflow by cooling the system from both sides of the PCB. This design would use the console's vertical structure to receive heat as efficiently as possible. 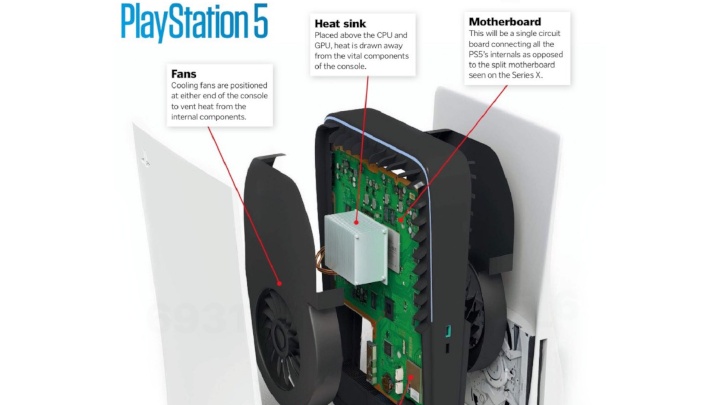 An artistic vision of PS5's cooling. Source: How It Works

As you can see in the picture, the direction of airflow is not specified. Although, from the shape of the fan blades we can deduce that they suck in air through a circular hole and then push it over the motherboard. On it, in turn, there is a heat sink that increases the surface of the heat transmission. It is placed mainly above the console's SoC chip (CPU/GPU). The picture does not show what is on the other side of the case.

Although the design seems rational and very probable, I will mention a few possible mistakes I have noticed in it. Both fans suck in air from the space on the sides of the casing, and the inlet holes should be located on its edges. We don't know yet how much space there is in these areas, but judging by the appearance of PS5, it's rather tight there. The air supply for the fans could be insufficient.

In my opinion, the use of fans with perpendicular blades, operating on the principle of centrifugal air compression, would give better results in such a design. On the illustration, we can see standard fans, which should rather rotate in opposite directions (I suggest some reading about counter-rotating propellers in airplanes). However, judging from the illustration, they rotate in the same direction.

The air is blown out through the holes on top of the console. That doesn't seem to be a good idea either. In the illustration, the outlets are directed up and forward, and it would be rather unpleasant to meet the player's face with a hot air stream while changing the disc. Of course, it's just a visualization and I think Sony has constructed it in a slightly different way.

How It Works is a monthly magazine distributed in the UK. It deals mainly with technological and scientific topics, trying to describe various devices in detail. Apart from the paper edition, we can buy an online version, or read articles on the website.

CS:GO Judges Appreciated for Their Help in Detecting Fraud