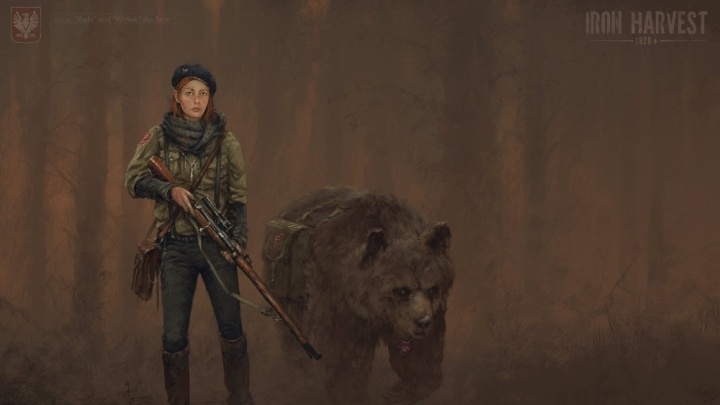 Anna and Wojtek are up to any challenge.

The creator of the intriguing mecha-meets-early-20th-century 1920+ universe, Jakub Rozalski, shared a handful of interesting details on Iron Harvest, an upcoming RTS set within that world. As we already know, the game will introduce three conflicted factions, obviously inspired by real nations: The Saxony Empire, The Polania Republic, and Rusviet. Now we got to meet Anna, the main character in the Polanian single player campaign, and her hairy companion, a bear named Wojtek (spelled Voytek). Together they make a great team  Anna with her never missing sniper rifle and Wojtek as a deadly warrior at close range.

Interestingly, there really was a bear soldier named Wojtek, who even became a Corporal in the 22nd Artillery Supply Company of Polish Land Forces during World War II. Polish soldiers found the bear cub in 1942 in Iran and adopted it. Later, the bear was given a name and was officially enlisted into the army. Wojtek proved a great help during the famous Battle of Monte Cassino in Italy, when he eagerly carried ammunition crates. You can read more about this on Wikipedia.

From the comments under this Facebook post we also know of yet another character: Lech, Annas guide and protector, and her fathers friend from the Great War.

Iron Harvest will combine elements of Company of Heroes, Dawn of War and Men of War. The game is being developed by German studio KING Art (The Book of Unwritten Talesand The Raven), and is to be released on PC, Xbox One, and PlayStation 4 in 2018.