In the collector's edition of Resident Evil Village we'll find a map of the title village. Thanks to this we got to know the names of several locations which we'll have to visit (user Orpheus2020 posted a picture of the item on Reddit - unfortunately it's quite small). 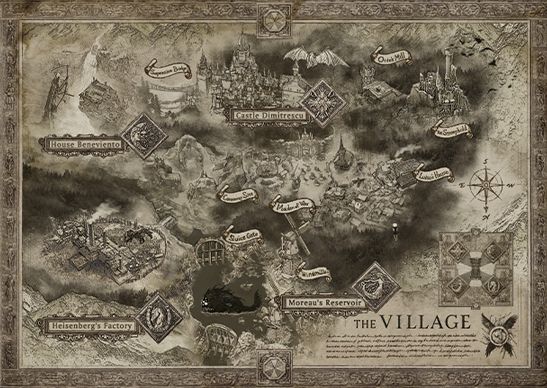 Apart from the castle of the mysterious (and huge) vampire Lady Dimitrescu we'll also get to House Beneviento, Heisenberg's factory and Moreau's Reservoir preserve, among other spots. It's hard to say what exactly these locations will hide, although some of the names clearly refer to well-known names and works (e.g. the word "reservoir" combined with "Moreau" seems to be an obvious reference to the book The Island of Dr. Moreau).

It's worth noting that the collector's edition of Resident Evil Village includes, apart from the map in question, a steelbook, a Chris Redfield figurine (one of the characters strongly associated with the RE series) and a 64-page hardcover art book. The edition also offers access to the Trauma Pack DLC.

ResidentEvil Village will debut on May 7, this year on PC and last and current-gen consoles (PS4, PS5, Xbox One, Xbox Series X / S).

EA Made a Fortune on Star Wars Games

Mass Effect: Legendary Edition Will be Less Sexist Than the Original

Up to 8 Years in Prison for Stealing CS:GO Skin