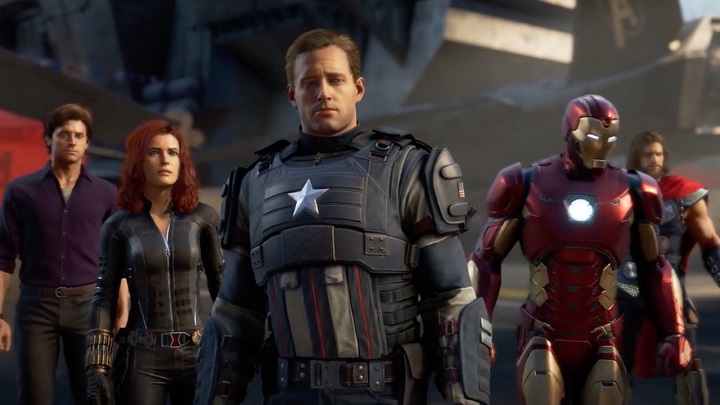 The Avengers are joining forces again to face a new enemy.

Update: Not one but two leaked videos of the demo shown on Comic-Con San Diego have appeared on the Internet. While the quality of the recording leaves much to be desired, the author managed to record as much as 7 minutes of gameplay, which, apart from Thor, shows the other Avengers as well. You can watch the whole video below.

Square Enix has announced that the first official gameplay from Marvel's Avengers will be available a week after the upcoming Gamescom event at the end of August 2019. At the on-going Comic-Con San Diego the company held a closed demo show, presenting the initial events taking place five years after the so-called A Day, which led to the break-up of the title Avengers. All heroes are hiding from justice. The new threat, however, makes the wanted heroes the only chance to save humanity.

The whole show was commented by Square Enix on Twitter, so that those absent from Comic-Con could get a gist of what the production offers. From the entries we learned, among other things, that the first one to appear at the scene of events at the Golden Gate Bridge was Thor, who helped in the fight against the masked enemy. Immediately followed by the other Avangers, Iron Man, Hulk, Black Widow and Captain America. Together they face their opponent, but:

This is how we will begin our adventure in Marvel's Avengers.

The creators also confirmed that after the prologue we get more possibilities and using the recovered Helicarrier as a base we will be able to launch a single player campaign or missions in cooperation mode. In addition, we've learned that most of the tasks can be completed with any hero (although some of them will be available only for certain characters). Those present on the panel could also see a 30-centimeter statue of Captain America, which will be available together with the collector's edition of the game (we will learn more about it before the end of this year).

Despite the ban on recording on Comic-Con San Diego a short video recorded by a phone has just appeared on the web, showing a fragment of the demo of Marvel's Avengers. It is of poor quality, but you can see Thor's battke on it, which gives us some idea about what fights in the game will look like. At this point it is hard to say whether the production will meet the expectations of the fans of Marvel and its superheroes. The launch is scheduled for May 15, 2020 and the title will be released on PC, Xbox One and PlayStation 4.