Minecraft received another snapshot as part of the beta testing of content for the Caves & Cliffs update. Snapshot 21w18a is available in the so-called Java Edition on PC after activation in the Installations section. We remind that snapshot sessions may cause the loss of your world! Therefore, we recommend making a backup copy of your world or running the game with snapshots enabled from a separate folder.

If you were hoping to get a bigger update after the recent modest snapshots, we have to disappoint you. Version 21w18a is one of the smallest Caves & Cliffs snapshots released by Mojang to date. Although only the list of fixed bugs can be considered substantial, it does not mean that there are no new features. From now on, screaming goats will be much more likely to attack (to clarify: each goat has a chance to appear as a more "noisy" variant of this animal). The functioning of so-called infected block variants has also been changed. They are no longer instantly destroyed upon mining, as before, but in twice the time of their normal counterparts. 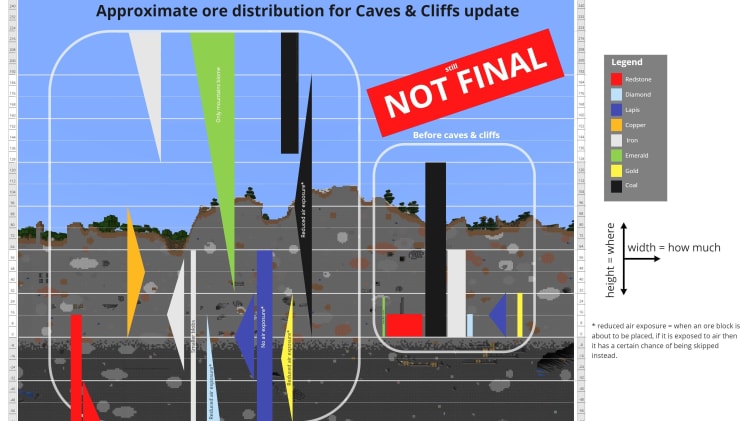 Distribution of metal ores in the Caves & Cliffs snapshot 21w18a (left) and in the base game. Source: Minecraft official website.

The developers have also changed the distribution of metal ores, although it is noted that this is still not the final version. For now, they've made copper and larger deposits slightly rarer, and in the latter case, also more varied in size. The possibility of noodle caves, introduced a week ago, appearing close to the surface has also been removed to avoid making the surface layer too dense. In addition, the devs have also fixed various bugs, including one reported by Minecraft players over eight years ago, i.e. on November 21, 2012. It was a minor bug that caused players to drop an item they were holding when using an anvil for the last time before destroying it.