We've seen another mod to increase the number of unofficial projects aimed at improving visuals in The Elder Scrolls V: Skyrim. For more than eight years since the release of Bethesda's work, several thousand of mods have appeared on a different scale and more are still being created. The latest one, entitled Tamrielic Textures 1 - Landscapes, recently made its online debut. The creator of the mod, ciathyza, prepared its version for both regular Skyrim with expansions and Special Edition. You can download them by going to the following pages. 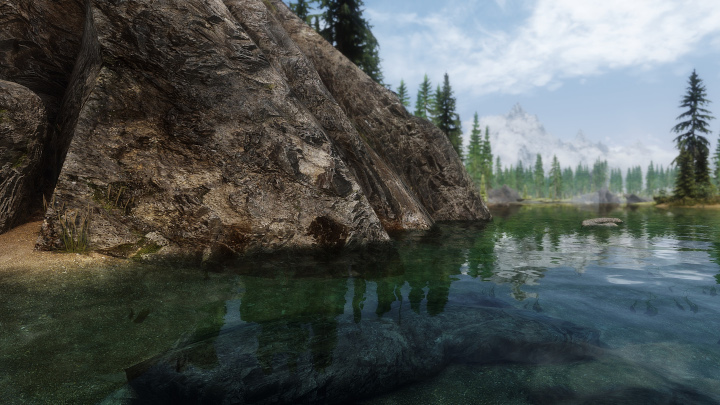 Such views encourage another adventure.

Tamrielic Textures 1 - Landscapes is the first part of a larger project that will eventually change all textures in The Elder Scrolls V: Skyrim. The package published last week includes earth, rocks, mountains, as well as paths and roads. Improved versions of the terrain are available in three resolution variants - 1K, 2K and 4K. For the latter two, it is recommended to have 6 GB or more GPU memory.

Youtuber hodilton prepared his look at Tamrielic Textures 1 - Landscapes in the version for regular Skyrim with expansions. We wrote about the user earlier in the context of his presentation of Minecraft with photorealistic textures and ray tracing. You can watch the video he recorded below. But keep in mind that the video contains more than just ciathyza's texture pack. If you want to achieve the same effect as in the video, you can find the list of mods used by the creator in its description on YouTube.

The more sets of Tamrielic Textures are to include improved textures of dungeons, villages, cities and caves. You can see the progress of the work on this page. If you like the work done by ciathyza, you can support the user financially on Patreon.

As a reminder, the first edition of The Elder Scrolls V: Skyrim launched on PC, PlayStation 3 and Xbox 360 in November 2011. The title is still very popular today, thanks to, among others, a thriving modding community. The fan projects cover not only the visual side, but also other aspects of the game - from fresh gameplay elements to new questlines and locations. You can learn more about this throve by visiting Nexus Mods.