Steam organizes regular surveys in which it checks what specific hardware its users have. The results of such a survey for March 2021 have recently been published, and the results, if we are to be honest, are not particularly groundbreaking, but at least they clearly define who rules the market these days. 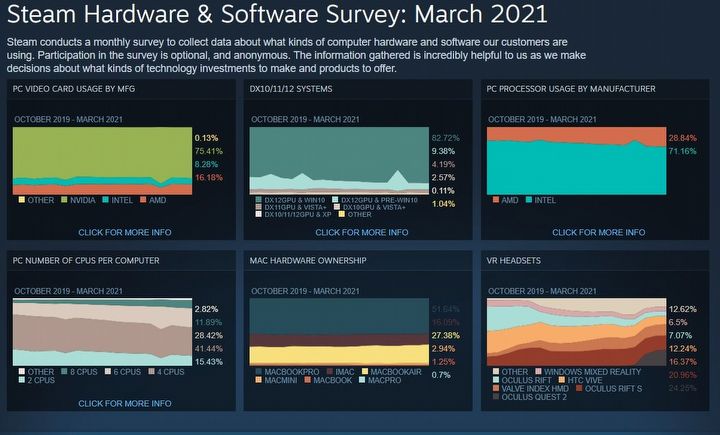 As far as GPUs are concerned, 75.41% of Steam users are using Nvidia hardware. So we're talking about almost total domination here. In second place is taken by AMD with 16.18%, and the podium is closed by Intel with 8.28%. The most popular used GPU is still Nvidia's GeForce GTX 1060.

There are also no surprises if we look at the market analysis of processors. Here, from time immemorial, the battle is fought between Intel and AMD, although it's the former that attracts more consumers, which is only confirmed by the results of Steam's study - as many as 71.16% of players use the gardware of this company. So it's easy to count that 28.84% of respondents chose AMD's CPUs. This result, combined with the graph, shows that AMD's share is growing steadily.

We sould also mention the most popular VR sets, because there is quite a squeeze in top spots. Oculus goggles lead the way - Oculus Quest 2 takes the first position with 24.25% of users, and in second place is Oculus Rift S with a result of 20.96%. The third place is occupied by HTC Vive.

You can find even more interesting statistics on Steam.