Omega Strikers is winning the hearts of gamers not only because of its interesting and action-packed gameplay in which you can compete against various rivals, but also because of its interesting characters. Whether a character is charismatic depends not only on their story, but also on the actor who provides their voice. In this guide you will learn, who lent their voice to selected characters in the game.

The popularity of Omega Strikers 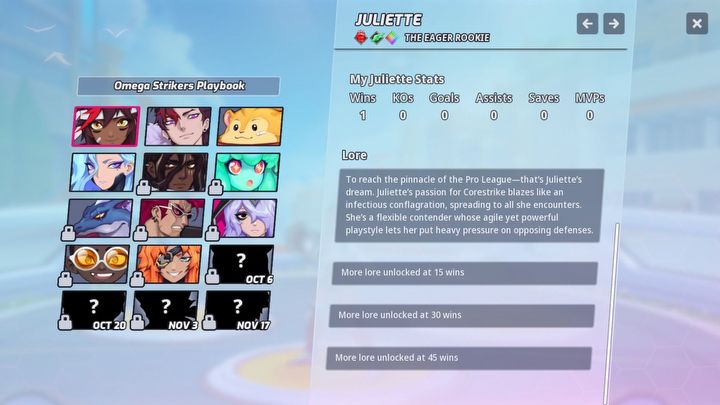 Each character has its own lore, which can be learned after winning a specific number of matches.

Omega Strikers has gained noticeable popularity on Steam, and it appears that the game is attracting a stream of new players. Some of them are trying to get to know the game as well as possible, and it's not just about learning the most effective techniques to win a match. Players' attention is also attracted by interesting characters, who have their own stories (lore) and each of them is voiced by a dedicated voice actor.

Juliette is the first character we meet in Omega Strikers. She is voiced by Erica Mendez, who has worked as a voice actress in the past for games such as the popular Genshin Impact or Fire Emblem: Three Houses.

Robbie Daymond perfectly played the role of the big star that is Kai. The actor has previously provided his voice in games such as League of Legends or Fire Emblem: Three Houses.

Seeing the large silhouette of a character like Dubu, one might expect him to speak in the low and deep voice of a mature man. Nothing could be further from the truth. Dubu's voice was provided by actor Casey Mongillo, who speaks in a rather high-pitched, slightly hoarse voice. Mongillo has previously worked on game such as thePokemon TV series or JoJo's Bizzare Adventure.

Estelle speaks in a smooth and confident voice that belongs to Laura Post, who previously worked on League of Legends or World of Warcraft. Estelle is one of the most likable characters in the game, and it's possible that some of the likability may be due to the voice actress.

Gabe Kunda is a talented voice actor who has proven himself in the past in games such as Apex Legends or Tiny Tina's Wonderlands. His matte, resolute tone of voice is a perfect fit for a character like Atlas.

Lilypichu, or more specifically Lily Ki, is an Internet celebrity who does music and dubbing. She can be heard, for example, in Legends of Runeterra. The actress has provided her voice to one of the more interesting characters, which is Juno, and this certainly has an impact on Juno's appeal to players.

Neil Kaplan is the most experienced voice actor working on Omega Strikers. His voice could be heard, among others, in Final Fantasy games. Drek'Ar, played by Kaplan, speaks with a firm voice befitting a character who excels in the offensive.

Arin Hanson, known by his stage name Egoraptor, has worked in the past on voice-overs for Rick and Morty and in the game River City Girls. The character he plays is nicknamed X. Egoraptor successfully portrayed this somewhat eccentric persona.

Era has some very useful skills, but he also owes his popularity to some extent to voice actress Rachelle Heger. She has worked in the past on titles such as Soul Hackers 2 or Rune Factory 5. We hope to hear her voice in many more games.

Erica Luttrell can boast a very long list of games on which she has worked as a voice actress. Worth mentioning are games such as Genshin Impact, Diablo 3, or Horizon Forbidden West. In Omega Strikers the actress provides the voice of Luna.

Asher is strong, determined and confident, and he is voiced by the talented Allegra Clark, whose voice players may be familiar with from games such as Apex Legends, Genshin Impact, or Dragon Age: Inquisition.

Feudal Japan in Bannerlord - Shokuho is a Must for Fans

The Witcher-related Sirius Project May Use Procedurally Generated World