Announced February's new free expansion for Path of Exile has just been first trailer. It presents the attractions of the expansion, which - as we learned some time ago - will be titled Path of Exile: Siege of the Atlas. You can watch the video below. Whereas the recording of the broadcast, during which details of the 3.17.0 update (which will introduce new content) were discussed, can be found here.

Path of Exile and one big Atlas

Path of Exile: Siege of the Atlas in a nutshell:

The team at Grinding Gear Games has prepared a lot of goodies for players, including new ancient bosses: the fiery The Searing Exarch and the all-devouring The Eater of Worlds. Both will bring with them not only powerful mobs, but also big changes in the operation of the titular Atlas. The expansion will remove from PoE both the division into boss regions and the Watchstones associated with unlocking them. The latter will be replaced by Voidstones, which will be used in a slightly different way.

In Siege of the Atlas we will not choose the location we want to go to, but one of the four bosses (in addition to the two new ones, there will be Uber Elder and Maven to choose from). This will take us to the maps controlled by a given adversary, and each successful hunt will make his presence more visible. Over time this will lead us to the aforementioned powerful adversaries, and after defeating them we'll stand face to face with the chosen (and very demanding) boss. 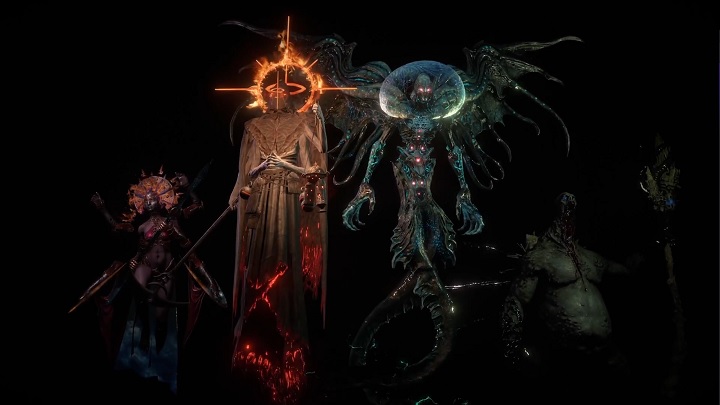 Soon Atlas will be invaded by old and new "ancient" friends.

However, this is not the most interesting part. On each map we'll get an additional objective, and for completing it we'll receive modifier points, available through one big Atlas passive tree. These are not used to personalize the character, but enable us to select interesting content to appear more often during the game. This enables players to encounter preferred enemies and loot while hunting new bosses.

Speaking of modifiers, defeated enemies will be a source of new currency. This will enable us to assign perks associated with two new bosses to our items, one from each of them.

If you want to get a lot of equipment quickly with a new character instead, you should be interested in the upcoming new league: Archnemesis. As part of this league we will face four petrified minibosses, which can be customized according to our preferences. To do this we'll need modifiers, dropping from rare and magical mobs, stored in a separate inventory menu. Depending on which of them we use on a "stone" monster, both its stats when awakened and the rewards for victory will change.

Importantly, each miniboss will remember the modifiers of its predecessor. Thus, it will be much more challenging, but it will also drop again the loot of already defeated adversaries. Thus, after completing the entire challenge we will receive the first set of rewards four times, the second three times, and so on.

Of course, this is not all, because Siege of the Atlas and the accompanying update 3.17 will also bring with them new equipment items, gems, and game balance tweaks (including archery and non-area magic boosts). There will also be some changes to make interacting with the game easier (called Quality of Life), such as dedicated equipment cards for potions and gems. What's more, as per standard tradition, the creators will remove another obsolete league: Prophecy. The full, very long list of changes can be found on the official Path of Exile website.

In addition, the developers want to celebrate the release of the expansion with a tournament in the Archnemesis league. Participants will have to solo three bosses (Maven, The Searing Exarch and The Eater of Worlds) as quickly as possible in Self-found League mode (that is, without the ability to interact with other characters). There will be prizes for the winners, more on which will be announced next week.

Games With Gold for February 2022 (Broken Sword 5, Hydrophobia, and More)

Epic Games Store is Doing Better, Though It Still Relies on Giveaways

Ubisoft Gives Up and Shuts Down Its Battle Royale Game