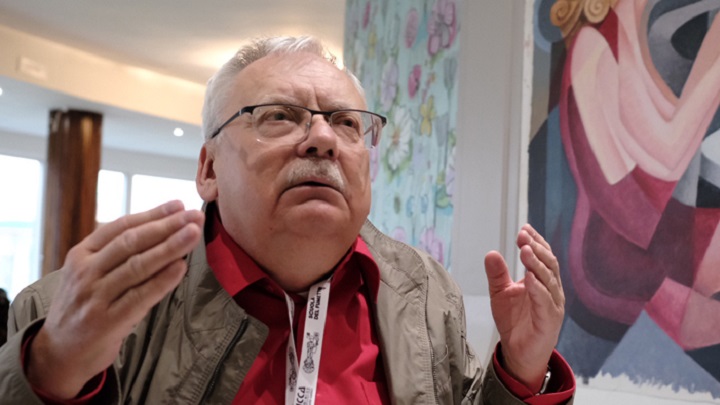 Andrzej Sapkowski during the Italian festival.

Today is the last day of the Italian Lucca Comics & Games festival, which hosted Andrzej Sapkowski, advertising The Witcher together with Netflix. Poland's most famous fantasy writer gave interviews to Wired and Sugarpulp and told them about his approach to the series, money, women, CD Project and the global fantasy literature scene.

Both interviews are quite similar, but we'll start with Sugarpulp, which is rich in quotes of pure gold In an interview with a journalist, Sapkowski clearly defined his attitude towards the fate of the characters he had created in the adaptations of his books:

I don't care what is done with my character in the cinema or in any other context [...].

He also referred to the issue of his financial claims against CD Project, summarizing that this issue is already beyond his control and adding:

Now, at this stage of my career, money means nothing to me.

About the creative process:

I don't know the difference between a craftsman and an artist, but one thing is certain, I am an artist. I'm a f**king artist! I created just like Leonardo painted the Mona Lisa.

In an interview for Wired, when asked about his involvement in the production process, he replied that he was a consultant during the script's creation and was paid very well for it, but did not participate in casting or shooting for the series itself - so when he sees the results of the team's work, he is always amazed. The writer also explained that there is no vision of what Geralt or the other characters should look like:

The truth is that I don't visualize the characters and the scenes I write, I don't have their image in mind. All I do is put one letter after another until I have filled a page. I have no idea how they should look like on screen.

He also referred to how he creates female characters, stating explicitly that what constitutes the driving force for a protagonist is obviously the woman. In answer to the question of why ladies are in his work usually stronger and more determined than men, he stated:

Because this is how it is in real life. Women are and always have been stronger than men. No [I'm not a feminist - editors note]. I love women, I love their role in a story and in the world, but I don't make it a philosophy.

When talking about fantasy writers and how to make a neme for yourself in the industry, he answered in his own style:

You can't compete with Anglo-Saxon authors. Those who aspire to international success need two things: an extraordinary talent and an excellent agent. I luckily have both.

At the end of the interview with Wired, he also revealed who is his favourite writer, praising his style and the way he builds history and characters. Here' a highly recommended writer for long autumn evenings: the name's Joe Abercrombie.

Dragon Age 4 Announcement in December to Celebrate 10 Years of the Franchise?