Team Fortress 2 community has once again united to remind Valve about the game. The title has been plagued by bots for a long time, which has a negative impact on the quality of gameplay. The protest paid off - Valve heard the voice of the community and addressed the problem.

What is the #saveft2 action? Well, players from around the world, who are not indifferent to the fate of the game, described their memories associated with TF, tagging them with the aforementioned hashtag. 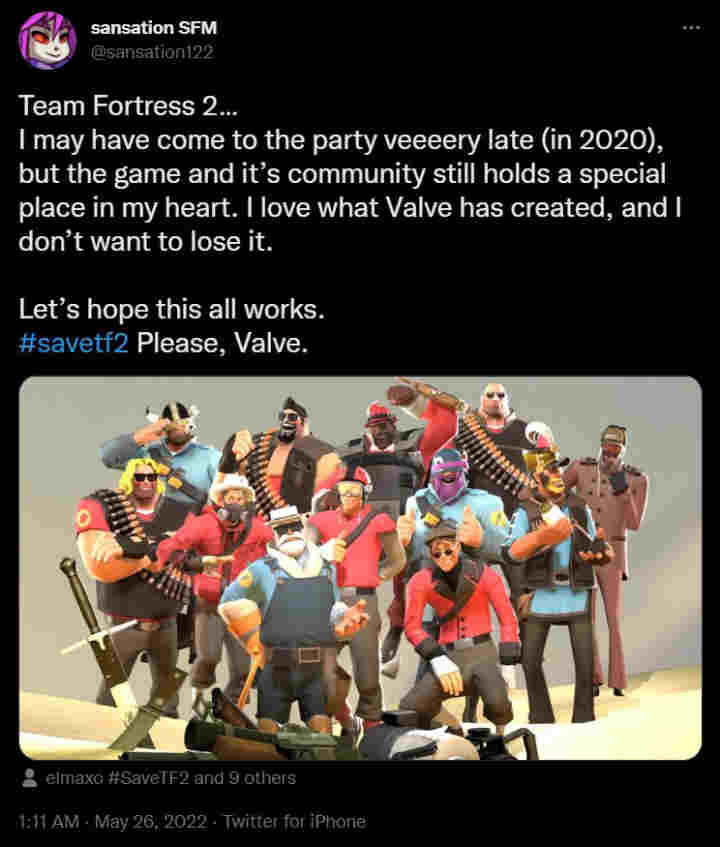 One of the tweets supporting the action, source: Twitter

What's more, one of the principles of this protest was not to contact Valve employees, or people connected with the development of TF2. It can be said that the community wanted to draw the attention of the developers with their dedication, instead of doing it in the form of spam and direct attacks.

The protest was planned for yesterday and it was hard not to notice it. In fact, on Twitter there were a total of more than 300 thousand posts marked with the hashtag. The community was also active on YouTube - more than 1.4 thousand videos were marked with the #savetf2 hashtag, and more than 1.7 thousand channels joined the action.

Team Fortress 2 fan hearts skipped a beat when the official Twitter account of the game posted an entry from the creators. In it, we can read that they are aware of the problems the game is facing and have taken steps to solve them.

You could say that this message is a laconic "we know what's going on and we're going to do something about it", but for the TF2 community, this is the moment they've been waiting for a long time. Valve hasn't said much, but who knows - maybe there will be a major update to the game soon.

What went wrong with Team Fortress 2?

The biggest problem in the game are omnipresent bots. For about 2 years Team Fortress 2 is almost unplayable due to their presence. Fans made several other attempts before yesterday's protest, but those, unlike what happened yesterday, were not successful.

Hopefully, since Valve is aware of the problem and intends to fix it, they will actually do so. In turn, the Team Fortress 2 community can be congratulated for their dedication and persistence in trying to improve the game.

My Time at Sandrock - Coop and Multiplayer

Sony Knows When It's Done With PS4 Games