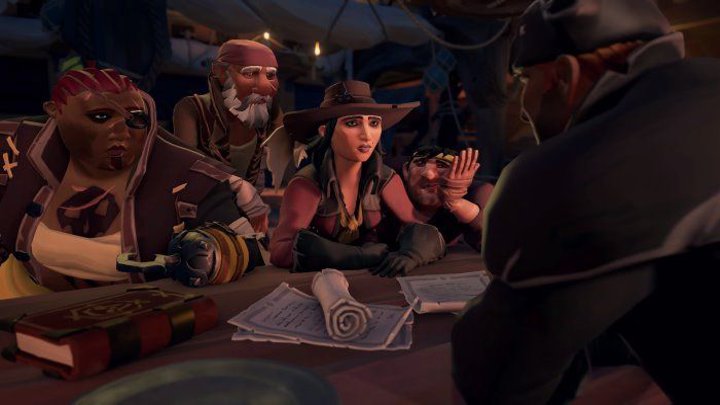 Many great pirate adventures begin with a rumor heard from a mysterious stranger.

Sea of Thieves is one year old. Although the online pirate themed production from Rare studio celebrated its first birthday on March 20, the release of the great update prepared for this occasion will take place next week, namely on 30th of April. So, there's a lot to wait for. Fans of the title will receive (free of charge) the long-awaited PvP mode called Arena, fishing, a better shipwreck & damage model, a harpoon and a story campaign called Tall Tales - Shores of Gold. You can take a look at a glimpse of it on the new trailer that appeared on the web. It is available below.

During the campaign, players will set off on a quest to the mysterious island of Shores of Gold. During this adventure they will visit unknown lands and ancient crypts full of traps, solve a number of puzzles, use new gameplay mechanics and face dangerous enemies (including powerful bosses). According to the creators, if someone is a fan of Goonies or Indiana Jones, they should like the story they've prepared (via Eurogamer).

If you want to know more details about the features that will appear in the anniversary update of Sea of Thieves, we encourage you to check out the other materials about it published by Rare studio. We're attaching them below.

Although Sea of Thieves was very popular among gamers on the day of its release, it was difficult to describe the debut as fully successful. The production received mixed reviews for its constrained amount of content and general lack of depth. The situation began to change with the next free expansion sets, which complemented the title with new attractions. According to the promises of the developers, intensive support for the game will be continued and, what is important, all novelties will be put into the hands of virtual pirates completely free of charge.