PlayStation 4 and PlayStation 5 owners may soon get their own Game Pass. As Jason Schreier (via Bloomberg) reports, Sony is to plan launching a service similar to that offered by Microsoft. According to documents on which Schreier relies, the concept of Spartacus - the alleged codename of this project - is a combination of what is currently provided by the PS Plus subscription (including the ability to play online) with a collection of titles available in PS Now. And that's not all, as Spartacus will also allow for streaming, checking out extended demos of new titles and games from older generations of Sony consoles - PS1, PS2, PS3 and PSP. 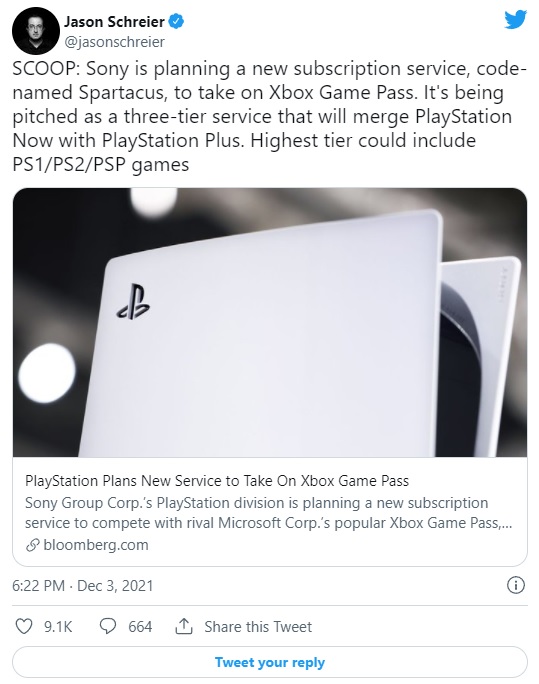 At the moment it is not known how much we would have to pay for it. Schreier reports, however, that there will be three thresholds available. The lowest should offer the same things PS Plus does. The middle offer is to be enriched with a regularly updated collection of games from PS Now (mainly from PlayStation 4, but some titles from PS5 are also to be included), while the highest threshold - the aforementioned demos, old games and playing in the cloud. Comparisons to Xbox Game Pass and Xbox Game Pass Ultimate subscriptions come to mind.

What's interesting, Sony's new service will supposedly launch in the spring of 2022. If that's the case, we can certainly look forward to the announcement of Spartacus - or whatever it may eventually be called - in the coming months. Until that happens, it's worth approaching this information with caution.

Jason Schreier did not mention anything about PC in his article. However, I quietly hope that if this scenario comes true, the Japanese company will decide to compete with Xbox also on PC.