It's been over a month since the release of "next-gen" version of The Witcher 3. While on PS5 and XSX/S the game by CD Projekt Red worked well or very well from the start, the PC release struggled with considerable problems. With some of them the "Reds" have dealt quite swiftly, but players regularly report more and expect a next patch.

All indications are that they will not have to wait too long. User t-dome (tdome85) asked Marcin Momot - CD Projekt Red studio's community manager - on Twitter today about when we can expect the next update. The answer came almost immediately. 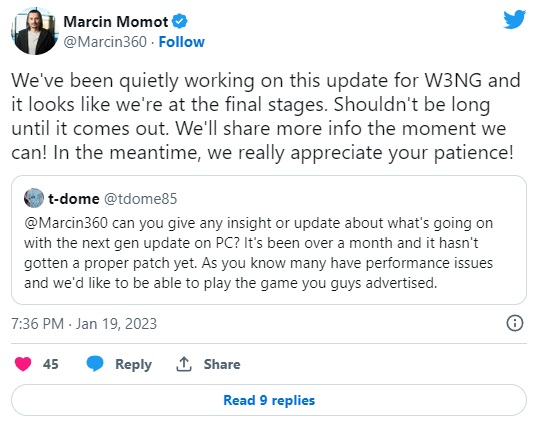 It is worth noting that Marcin Momot did not specify whether he was referring exclusively to the PC version update or cross-platform. Although the Internet user's question concerned the former, it is possible that the team ise working on a patch for PC, PS5 and XSX/S, since on each of these platforms The Witcher 3 is still struggling with various problems. Well, it remains to wait for more news.

Rimworld - How to Build Multiple Colonies Tips and Tricks