In the second half of December 2021, an inconspicuous game hit Steam - Vampire Survivors. It is a combination of roguelike, survival and bullet hell. Thanks to the retro pixel graphics and the main theme, it's not hard to find references to the first parts of the Castlevania series. The game on Steam costs around $3, and on itch.io we have a chance to try it out for free in a simplified version, acting as a demo. Sometimes such a low price can be discouraging, which is of course influenced by the flood of cheap productions on Valve's platform, which are created as nothing more than cashgrabs. This time it is different. This is the first game by the creator, who managed to reconcile simplicity with an extremely addictive gameplay.

The gameplay premise in Vampire Survivors can be described in a few sentences. We choose a character and move around the map, placing the character in the right place, so that our automatic attacks destroy the incoming waves of bats, skeletons and mummies, while trying not to get hurt too much. Crystals that give experience drop from the killed opponents. After advancing to a higher level we can upgrade our character and proceed to more difficult challenges. That's the whole gameplay - simple, right?

The key to success

Hardly any independent game created by a newcomer achieves such success. Vampire Survivors remains in early access, but is already collecting overwhelmingly positive reviews and comments are filled with admiration. The number of players continues to grow - at the moment it's over 20 thousand concurrent players. The title is also present on Twitch, where streams from the game attract tens of thousands of viewers. The game also took 17th place in the Top Sellers tab on Steam. 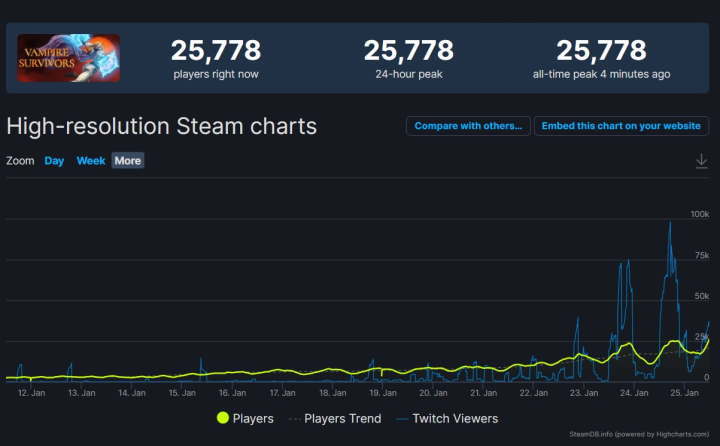 Kotaku equates the joy of gameplay with the constant, small rewards for the player. Also emphasized is the satisfaction of clearing a map swarming with enemies just seconds before. The website's editor compares the game to mobile productions, which not infrequently use various, often similar methods to keep the players interested - be it small gifts or crates of gold.

Apart from the success itself, Vampire Survivors is a surprising depiction of the needs of many gamers. Comments from the community are unanimous - this simplicity is a kind of break from AAA games from big developers, with photorealistic graphics and elaborate storylines that we have been used to for years. People were looking for a title that would keep them occupied in their spare time and not involve big sacrifices, such as having to spend many hours playing. The end of the game is sudden and final, and the story can be replayed multiple times - according to many, you get a game that is hard to walk away from.

One of the highest rated comments on Steam is that of a disabled player, who praises Vampire Survivors for its simple controls that enable him to play the game. It's not uncommon for big studios to have trouble adapting their games for people with motor problems, so it's most likely a coincidence that by focusing on simplicity, the developer, known by the handle Poncle, included this group. We can count on the fact that with growing support, the game will be developed. After all, it's only early access.