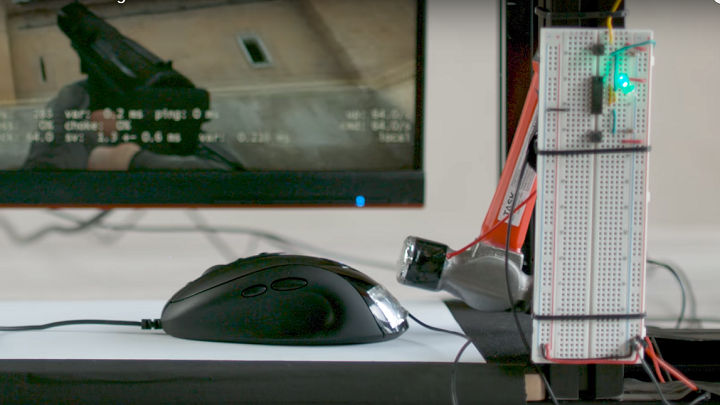 Some time ago Linus Tech Tips channel posted a video from an experiment, which was aimed at checking if users will be able to distinguish between a wired mouse and a wireless model of almost identical parameters. However, those tests were based on the subjective feelings of the users, which resulted in possible errors.

After shooting an episode about the impact of the screen refresh rate on gameplay, which was shot with a camera that captured images at 1000 frames per second, the Canadian team also decided to use it to test in a more reliable way the different reaction times of different types of mice.

It came out almost scientifically.

Tests included recording a mouse that was hit by a specially designed hammer with a sensor, and the screen and measuring the time elapsed from the moment the mouse was set in motion to the reaction in game, which was, once again, CS:GO.

As it turns out, the tested Logitech models G MX518 wired and G703 wireless are comparable and any deviations are within measurement error. The results of the experiment also confirm once again that top gaming mice actually have a smaller input lag than cheaper products for everyday office use, such as Logitech MX Anywhere 2S. We encourage you to watch the whole episode, where you will find the full results of the measurements and the presentation of the methodology.