There is a platform, against which the usually conflicted PC and console gamers join their forces – smartphones. But that doesn't change the fact that mobile games are extremely popular, and the topic will come back like a boomerang. Some say, they should not be taken seriously, because they are full of grind, pay-to-win mechanics and microtransactions, and in the vast majority we "play" them on autopilot. However, in the end, modern smartphones are easily able to run the classics from the 90s, and even from the early 21st century. That's why this time, instead of looking for successful novelties, we have prepared a list that focuses on classics.

All according to the "used to be" principle. After all, video games used to be wonderful and no one complained about them. So why not play those old but still gold works on your smartphone?

We rated the titles in terms of comfort of playing on touch screen and the quality of mobile port in general. It is worth remembering, however, that a large part of the items from this list will cost you, as much as a dozen dollars in some cases, on Google Play. And no wonder. After all, all these games were created at a time when microtransactions were not as common as they are today.

If you think we've left out some old-school titles worth remembering, don't hesitate to write about them in the comments. Perhaps thanks to you, someone will find their old gaming flame on their phone. 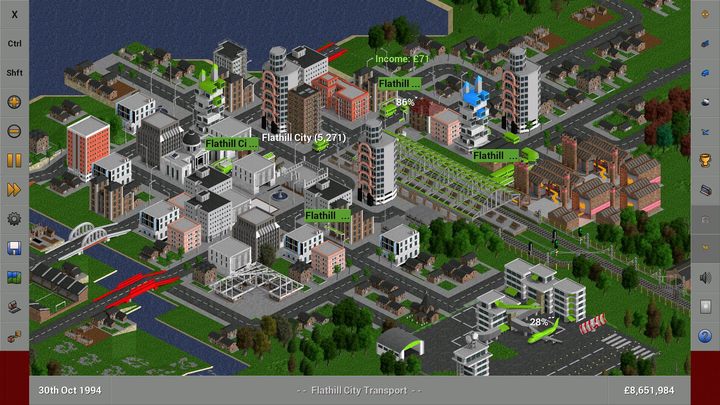 The golden era of economic strategy games commonly known as "tycoons" is long behind us. While I myself spent more time on RollerCoaster Tycoon 2, I still remember very well 1995's Transport Tycoon Deluxe. As the name suggests, we become an entrepreneur operating in the transport industry and create road, rail, naval and aerial connections. We manage individual lines so that our company earns as much revenue as possible from the goods delivered and passenger transport.

Today, it may seem like such a game concept couldn't possibly gain any popularity. However, given that in Transport Tycoon we were constantly competing with other companies, and in the Deluxe edition we could even buy shares of our rivals on the stock exchange, it was impossible to complain about lack of things to do. Thanks to a fan initiative, the game was streamlined and released as OpenTTD on PCs and later also on smartphones.

This project is still being developed and the Open version is proving to be far more polished and content-rich than what is being sold on Google Play as Transport Tycoon.

Bethesda may have released The Elder Scrolls: Blades on mobile devices, but the web also offers a mobile version of good old Morrowind. It is available under the name Morrowind OpenMW and is a port of a fan project that aims to refresh The Elder Scrolls III: Morrowind by porting it to an entirely new engine.

The Android version should be treated only as a curiosity. It is unstable, the controls are below average and the installation process should effectively deter a large number of people. However, if someone is stubborn and wants to check on the mobile Morrowind, they will be able to do so. The only word of warning from me is that they won't be able to do it legally. Bethesda contacted the people responsible for the design of OpenMW engine and asked not to make Morrowind available on smartphones. So whatever you do with this knowledge, it's your own responsibility.