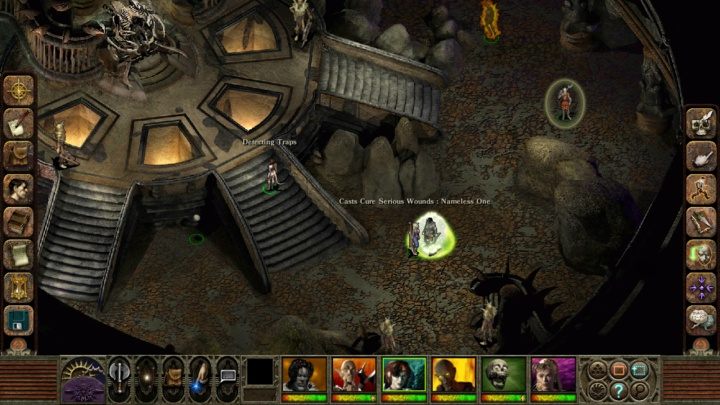 They don't make RPGs like this anymore. Baldur's Gate, Icewind Dale or Planescape: Torment - now these were games. They all received refreshed versions with some new features  except for the latter. Planescape Torment: Enhanced Edition does not expand the plot in any way and doesn't introduce new content, it changes basically nothing. The only thing that has been updated are the visuals.

However, this is not so important here, as the game was never about a visual feast for the eyes. What matters is the story that we have a direct influence on. It's one of those productions where you have to be prepared to read huge amounts of text and make decisions that affect the course of the game and its conclusion. Also our protagonist is also an unusual character because he can't die. Each "death" ends with an awakening after some time and a hole in the memory. We must therefore discover what lies behind our immortality and how much impact it can have on human nature.

How does Planescape: Torment Enhanced Edition work on mobile devices? Well, it definitely isn't bad, although it lacks the option of scaling the interface. The controls could also be a bit more comfortable, and the port is short of breath at times. To be comfortable, you need better hardware with a bigger screen, which is why I highly recommend a tablet instead of a smartphone in this case.

And since I mentioned before Baldur's Gate, I can't help but add two words about the mobile version of both installments. They are definitely not as good as Planescape: Torment, so I am unable to recommend them with a clear conscience. The controls cry out for vengeance, and the app tends to freeze and crash, which makes the fun an extremely risky experience. You never know if a particular gameplay section will have to be started over due to the whims of the app. You play these games on your own responsibility!