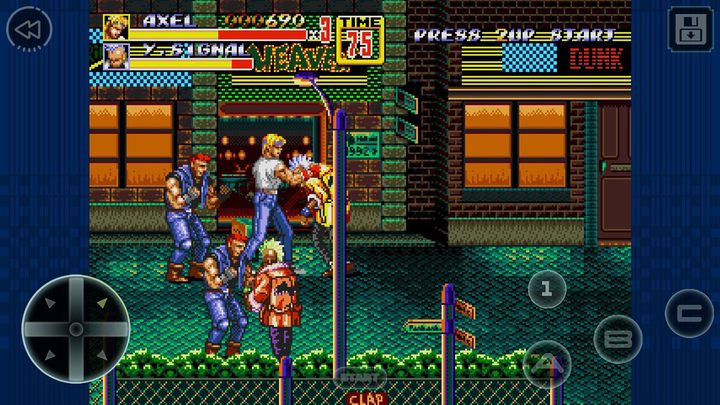 Although today SEGA is but a shadow of its former self, the company has released dozens of really great titles in its time. One of the more iconic was arcade Streets of Rage 2, which originally debuted in 1992 on the Mega Drive console. It is also available on PC, Xbox 360 and PlayStation 2, and more recently on mobile devices.

Streets of Rage 2 is a typical representative of the side-scrolling beat em up genre. We face the dangerous Mr. X and his thugs who kidnapped one of the protagonists of the first part. We have four characters at our disposal, each with unique strengths and weaknesses. In addition to the typical swinging around with our fists and feet, some variety is added special attacks that consume our energy. There is also no shortage of "hardware" (knives, sticks, pipes) left behind by defeated rivals.

The charm of the mobile version lies in fluidity and pleasant controls. In this respect, developers cannot have delivered flawlessly. Admittedly, playing on touch screen isn't as pleasant as on good old arcade machine, but Streets of Rage 2 is excellent compared to other mobile titles. This game is available for free, which in this case means ever-present, annoying ads.