Every new piece of news concerning Amazon's Lord of the Rings series, topped by the recently announced release date, has gradually fueled the desire to return to the Middle-earth in me. I finally did – certainly not for the last time – and once again embarked on a journey to Mordor alongside Frodo and Sam. Before I knew it, I was again also reading The Hobbit, The Silmarillion, Children of Hurin, Unfinished Tales, Beren and Luthien, and the relatively recent Fall of Gondolin. Still, I couldn't get enough of J.R.R.'s world. So, I decided to reach for the games. Specifically, three titles, which in my opinion deserve to be called the best adventures set in this universe.

It's the real-time strategy series titled The Lord of the Rings: The Battle for Middle Earth. It consists of two full-fledged parts and one large supplement. Particularly the sequel, released in 2006, conquered my heart and mind – I've been waiting in vain for fifteen years for any game to take its place – but all three deserve recognition. For obvious reasons, these productions are quite similar, but that's not the only thing they have in common. There's something else; a flaw that makes these gaming diamonds often equal in value to brilliants (keeping the right proportions). The series once published by Electronic Arts is now almost gone and impossible to find.

Shadow of the past 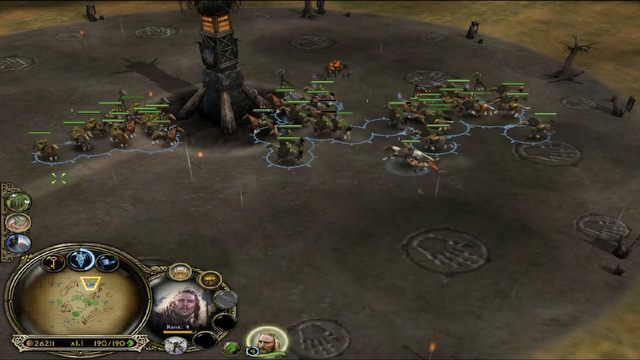 Buildings in the original could only be erected on such fields.

The announcement of EA's first BFME caused quite a stir among the Middle-earth fanbase. Jackson's film trilogy was still fresh, and the games that accompanied its second and third installments – the console-based Two Towers by Stormfront Studios and the multi-platform Return of the King by Visceral Games – became broadly , and the US publisher got a little credit right from the start. The hype was further increased by the revealed RTS elements. On the one hand, there was the opportunity to take part in the greatest battles of the Third Age – the storm of Isengard by the Ent, the defense of Helm's Deep, the battles on the Pelennor Fields and that at the Black Gate – and take command of Rohirrim troops; on the other, there was the chance to turn the tide of the War of the Ring in a campaign by commanding the forces of evil, whose ranks were to be reinforced by the Balrog, the demon from the Moria mines.

At a time when information was not as easily verifiable as it is today, it generated massive hype. The trailers, showing spectacular battle scenes, made peoples' imagination run completely wild. Mind you – those were the days, when you were more likely to watch a game trailer on a viedo-games-mag CD, rather than YouTube. One of the worse news I remember was the news about the change of the release date – from November 16 to December 6, 2004. At the end of the day, at least I knew exactly what I wanted to get from Santa Claus.

Almost at the same time as the first installment of Battle for Middle-earth – namely on November 2, 2004 – another game set in J.R.R.'s universe was launched . The RPG Lord of the Rings: The Third Age, available for sixth-generation consoles. This production can be compared to some entries in the Final Fantasy series – especially when it comes to the combat system – but the plot, atmosphere, and characters were already LOTR at its best. Unfortunately, much like BFME – or perhaps even more so – The Third Age has become extremely rare these days.

In 2004, the Battle for Middle-earth was truly enthralling, and the fantastic atmosphere of the novels and films literally poured out of the screen. The multiplicity of missions, spectacular battles, beautiful graphics, Howard Shore's unforgettable music – it was a real feast for the senses. The best evidence of this is how playable BFME still remains today. And although it's hard for me to completely ignore the shortcomings of this production – the relative simplicity of the whole thing, the painfully repetitive battles, the strange gameplay solutions (forcing you to sacrifice units in order to be able to train more and thus raise the level of the building), and some limitations in designing the base – they pale in comparison with the sheer playability of the addictive gameplay. It is also important to know that the foundations laid in "one" were used to create "two," which was polished in many respects. 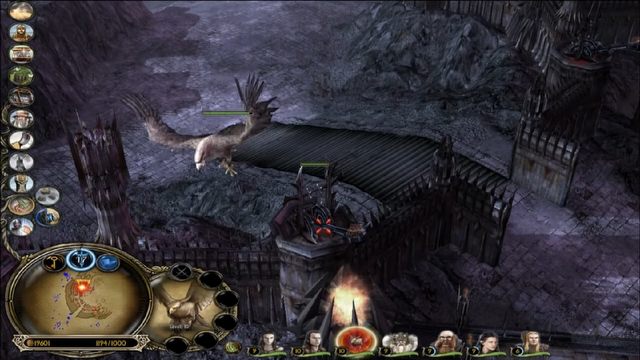 The creation of the sequel was not as obvious as it might seem now. The first issue was: what would it be about? After all, EA had already told the entire story from the movie. That's right – the movie. The novels were still untouched. In order to show stories not presented on the silver screen, EA obtained the license to use the material from The Lord of the Rings books. Would you be as excited about similar news – EA developing a game based on a book – today? I know I wouldn't. But then someone at the company apparently decided that such a move would pay off. And praise them for that decision!

Battle for Middle-earth 2 showed fans many adventures previously only described on the pages of the novels. For example, we visited the Blue Mountains, the Dark Forest (six years before The Hobbit: The Incredible Journey), Erebor, and the city of Fornost. We also got a chance to look a little more closely at Grey Havens, Lorien and Rivendell, as well as the Shire. The book license also made it possible to introduce characters absent from the films, such as the dwarf king Dain, or the singing Tom Bombadil. In other words, fans of Tolkien's prose found many novel adventures in the sequel, and each of them had a distinct, unique flavor.

EA finally focused on quality, rather than quantity. Again, we got two campaigns – of good and evil – but instead of a plethora of secondary skirmishes, in which our only goal was to destroy the enemy, they both consisted of eight thrilling, extensive missions varied both in terms of visuals and gameplay. Siding with the forces good, we defended the House of Elrond from goblins, fought with a dragon, or recaptured Dol Guldur from the orcs. By choosing the path of evil, we destroyed all the enclaves inhabited by the Children of Iluvatar – including the idyllic Hobbiton – while preparing Middle-earth for the return of the Lord of Darkness. 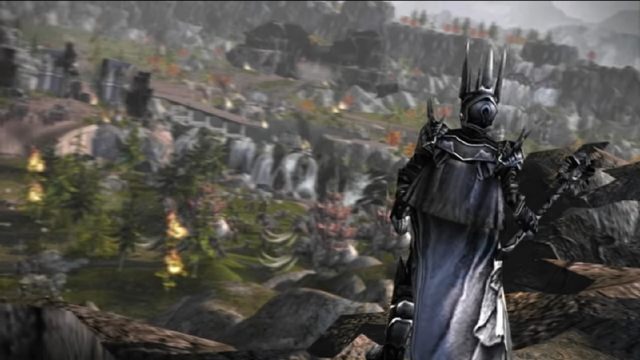 I am complete – thought Sauron, looking at the chaos and destruction in Rivendell.

We could even play as Sauron, and his (its?) counterpart on the side of good was Galadriel. We also took control of new characters – like the elf Glorfindel and the spider woman Shelobah – as well as some of the characters from part one. Heroes could make a difference, but battles were won by armies. These were particularly varied, for on one side of the barricade fought the combined forces of Gondor and Rohan in partnership with elves and dwarves, and on the other, the legions of Mordor, Isengard, and goblins. The special skill trees were also expanded with new abilities, so that when we played as evil, we could summon the Balrog, as well as the Watcher in the Water – extremely strong in the initial phase of the campaign – or a powerful dragon. Is there anyone in the room who's not already ecstatic?

Well, I guess only the most orthodox fans (aka fanatics) of Tolkien's oeuvre weren't fully satisfied. In the end,Battle for Middle-earth 2 misrepresented many storylines, and where it lacked substance, it added its own story. However, it was impossible to satisfy everyone, but the developers' decisions were mostly justified, in my opinion, at least. Honestly? I'd like to see the faces of the malcontents complaining about the possibility of saving Boromir in the first game, when they encountered the veritable fanfic served a few years later in Middle-earth: Shadow of War.

BFME2 was simply an improved version of BFME. The gameplay was polished and a bit more complex, but it still remained accessible to almost anyone. In addition, the construction constraints known from the original disappeared – we could finally build individual structures at will. It may not have been a perfect sequel, but it narrowly missed the mark.

In late 2006, Battle for Middle-earth 2 received the Rise of the Witch King expansion pack, which, once again, took advantage of the books and moved the action to the time between the battle of the Last Alliance, and Gandalf's discovery of the truth about the Ring. We took control of the Witch-king of Angmar, the leader of the iconic Nazgul. Over the course of eight missions, we built a power worthy of Sauron himself in the west of Middle-earth. The expansion introduced new powers, units and heroes; the storyline equaled the one from the core game, and the level of challenge was quite high. In the final, ninth mission, we had to turn the power we had created into dust so that events could unfold according to the history of the Third Era. It's such a shame that such expansions are almost never made these days.

Gandalf surely knows which way the franchise is going.

After Battle for Middle-earth 2, Electronic Arts released yet another game based on the The Lord of the Rings license – a moderately-received action game subtitled Conquest. Then the license returned to Warner Bros. (after eight years), which owns New Line Cinema, responsible for the film trilogy. In this respect, nothing has changed since. And while we've seen some pretty good games since (Wars in the North, Shadow of Mordor, and Shadow of War), none of them, in my opinion, equaled BFME2 – one game to rule them all. To make matters worse, due to expired license, EA could no longer distribute their games from the Tolkien universe. That's why they're only available today at online auctions, usually for several times the original price. EA and Warner Bros. could, of course, settle this matter... but that's not likely to happen. Especially with Amazon's upcoming series, which will once again hype the brand up. People at WB would have to be out of their mind to let the license go at a time like this.

As a long-time fan of fantasy in general and Middle-earth in particular, I try to get to know everything set in the universe – books, movies, and games. Like a real hobbit, I like to return to them again and again to relive the stories I know so well. Both parts of BFME have a special place in my heart both as very good RTS games and productions that best captured the book and movie atmosphere for me. As I nurse my copies of these games, I ache that the double-edged sword of digital distribution and licensing agreements have cut off so many people from access to them today.

The Lord of the Rings: The Third Age