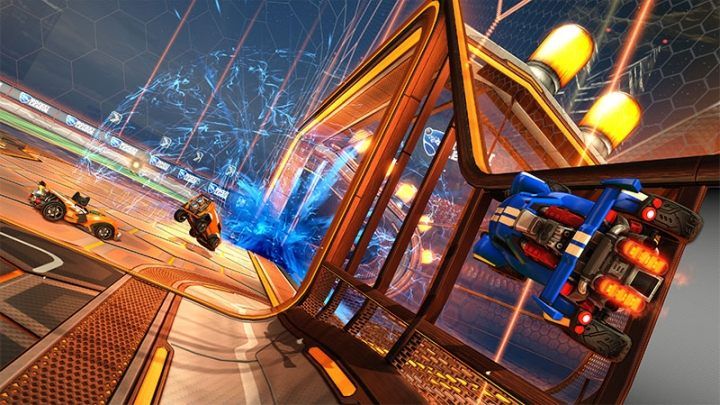 Co-op type: local or network matches against other players or AI for up to 4 people on a split-screen

One of the most popular independent games of recent years is usually associated with online gameplay, but the unique successor of Supersonic Acrobatic Rocket-Powered Battle-Cars (I really wanted that title to be mentioned in the article) provides just as much (if not more) excitement when it comes to local multiplayer matches. A maximum of "four-car" team can compete on a split-screen against the AI or other players via local multiplayer.

Theoretically, Rocket League is a sports game with rules strongly reminiscent of the rules of football. We have a ball that two teams try to get to the opponent's goal. In order to win, teams need to cooperate, synchronize their actions, and practice together. What distinguishes this game from the next installment of FIFA or PES is that we don't control footballers here, but rather... remote-controlled cars equipped with rocket propulsion.

The aforementioned Supersonic Acrobatic Rocket-Powered Battle-Cars was based on the same foundations as Rocket League. It was also an unusual and highly skillful variation on the theme of football, in which the matches involved not footballers but unique cars. However, Psyonix's initial approach to the subject was met with moderate press reception and did not gain as much popularity among gamers as the sequel.

The vehicles can jump, double jump, or activate Jet Propulsion, which in combination with highly agile controls and the unusual physical systems makes rounds extremely dynamic and effective. During five-minute matches, the situation can change every few seconds. The satisfaction of winning together is enormous, and tons of cosmetics to unlock and regular new attractions served by the creators effectively mobilize frequent returns. 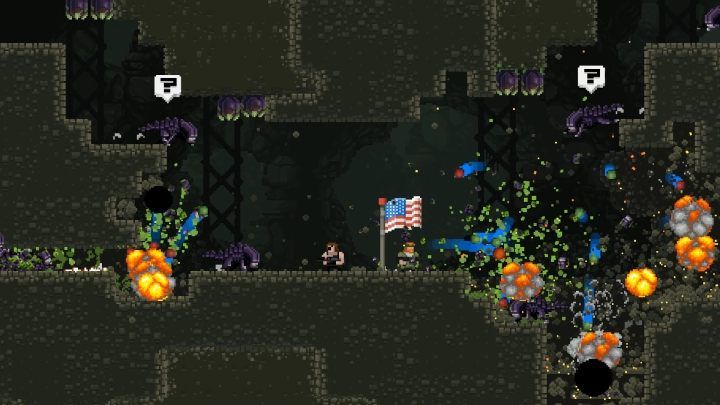 The inconspicuous game created by independent studio Free Lives buzzes with so much testosterone that you could give it to an army of Kratos, Big bosses, Geralts and Blazkowicz – and there would still be plenty left. In this game, players assume the roles of unofficial versions of nearly three dozen iconic characters – including John Rambo, The Terminator, The Texas Ranger, MacGyver, Judge Dredd, Snake Plissken, Robocop, Indiana Jones, Neo, Conan, Ellen Ripley, Predator, and Bruce Lee.

Players gain access to the next "Bros" as the game progresses, and although in the main modes the game draws a character from the available pool, we get an opportunity to try out each character – the protagonist we control is basically changed every moment. And the heroes are quite diametrically different from each other. Although they consist of just a few pixels, each one is characterized by unique weaponry and a special attack.

Thanks to this variety, players constantly have to adapt to different situations – it can be difficult because as an homage to action cinema, there are hundreds of enemies to kill, levels can be set with explosions and arrows, and the whole is prepared so that individual maps end in a matter of tens of seconds, a few minutes tops – unless we die along the way, which happens quite often. A lonely festival of destruction can get boring quite quickly, but in a duo or even a larger group of friends, it's not easy to get away from the screen.