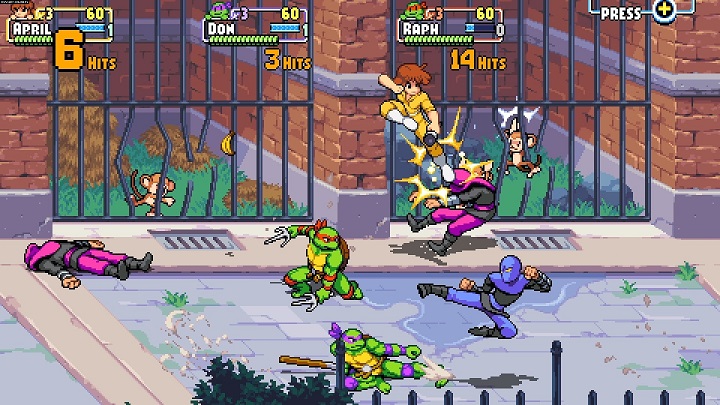 Co-op type: All levels can be completed in a team of up to 6 people

Teenage Mutant Ninja Turtles are pretty much an essential beat 'em up. The whole game is focused on hand-to-hand and melee combat with a large number of opponents. In the classic installments, fights happened in two-dimensional, side-scrolling levels. As you can see in screenshots and gameplays, Shredder's Revenge follows the tradition and successfully restores a somewhat forgotten formula to grace. Brawl games enjoyed their heydays in the 1980s and 90s. XX century.

Although the gameplay may seem almost painfully simple, there's plenty of room for interesting features. Each of the characters feels a bit different, mainly due to unique special blows. And here's a note: triggering even the most spectacular moves doesn't require complicated combos of buttons – it's not Mortal Kombat. We unlock special attacks simply by playing with a given hero. The creators implemented something akin to experience levels and a character development system. Another interesting feature is the ability to heal a companion who has been hit hard. To do this, you just need to transfer your health points to their health bar.

Local cooperation mode allows up to 6 players to fight together. In addition to four warrior turtles, we can play as Master Splinter, reporter April O'Neil and Casey Jones (April's object of affection). The latter must be unlocked – you only need to complete the game once. Because the way it's constructed, Teenage Mutant Ninja Turtles: Shredder's Revenge seems to be the perfect game for parties. It's great for quickly launching it, playing a few rounds, to then return to other activities. With a bit of practice, you can also pretty much speedrun the game through. It is quite short. The playing time is approximately 3 hours.