A TPP action RPG inspired by Greek and Roman mythology. In Asterigos we play a warrior named Hilda, whose search for her lost father leads her to a ruined city. Wandering through it, the protagonist faces hordes of enemies. 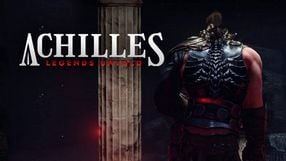 Action RPG in which as Achilles we find ourselves in the middle of a conflict between Ares and Hades. Achilles: Legends Untold allows you to play solo or in co-op mode. Game was developed by Dark Point Games, a Polish studio.

Poseidon: The God of Atlantis is the official extension to the highly popular economic strategy of Zeus: Mr. Olympus. Just like in the base game, the action of the add-on was set in antiquity. This time, however, players take control over the development of mythical Atlantis. Developers from Impressions Games studio have also decided to add a functional editor, allowing you to create your own play scenarios.

An addition to Spartan turn-based strategy based on events for which the (un)indirect reason was the beautiful Helena. In addition to the battle for Troy, the supplement contains scenarios describing the colonization of Greece and earlier famous conflicts: the Ionian campaign, the Battle of Thermopylae and the Roman-Persian campaign.