Grim Dawn for PC is a dark mix of action with elements of role-playing game, developed by the Crate Entertainment studio, which includes veterans of Iron Lore, who had previously worked on action role-playing game  Titan Quest.

The story of Grim Dawn throws the player into the middle of a dark, war-torn world of Cairn. This once proud empire has been brought to collapse as a result of the struggle between two powerful forces. Although each of them has different objectives, the rivalry between them proved to be fatal for the human race which has been driven to the verge of extinction.

The underlying conflict between the invaders became a struggle for the human bodies which one of the side use as a resource to grow stronger. The second, in order to prevent this from happening, exterminates the human race so their enemies cannot use the bodies of Cairn residents. The war between the invaders proved to be disastrous for the entire region. The bitter rivalry distorted the structure of reality, bringing to life terrifying monsters. Those who managed to survive the slaughter created small enclaves scattered around. Some of the survivors possessed extraordinary abilities and these give hope to people that with the help of a brave hero they will manage to organize a resistance movement and save what is left of the old Cairn.

The first task faced by the player wanting to face in the fight against the powerful forces of the enemy, is to create a hero. Five character classes are given to our disposal which can be combined to form a hybrid. Each has access to a number of skill trees. During the development of the character, it is possible to reach up to 200 levels of experience, and up to 75 in each class. Each of the general levels provides three points to spend on character improvement that can be assigned to either class levels or to raise the issue of values based on skills. It is a quite interesting solution, because it requires to choose between development of the class, which provides higher attributes, more health and mana, and unique combat skills without which the chances of winning battles considerably decrease.

Each character is described using three attributes: cunning, body, and spirit. This is a classic division of a higher chance to hit / critical hit, a larger number of points of life / chance to dodge, and a greater amount of magical energy / higher magic damage. In addition to the previously mentioned attributes rising by advancing in character classes, each general level provides the opportunity to raise one of them by a few points. This system, although simplified, works pretty well and is intuitive.

Collecting items is also an important part of the game, some of which can be modified and combined (crafting) to create new ones. There are four types of objects: ordinary, very common (yellow), readily available (green), and rare (blue). Of course, the more difficult to find or acquire the item, the better statistics and a greater number of special abilities it has. What is interesting, at the very beginning of the game a lot of enemies drop yellow items and not just tons of metal junk worth next to nothing.

Graphics-wise Grim Dawn on PC looks similar to its predecessor, as it uses an improved Iron Lore engine, the same one that was used to create Titan Quest. The developers have perfected the looks of the areas, however, and made it possible for the players to use the camera rotation function which increases the feeling of spaciousness and three-dimensionality of the world.

In addition to single player mode with expanded storyline, the game also features a multiplayer mode in which the emphasis is put on teamwork. 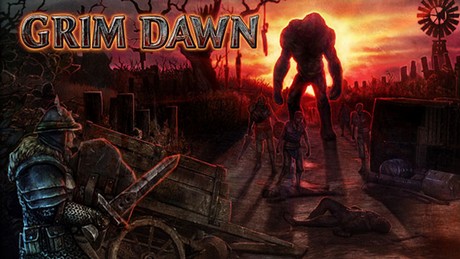 The creators of the magnificent Titan Quest certainly didnt rush their next project, but after years of hard work, we have finally got it. Grim Down is a surprisingly good hacknslash, and a solid base for further growth.

Grim Dawn will be out of Steam Early Access this Thursday

Titan Quest developers are finishing up their new action-RPG. Grim Dawn will be fully out on Steam on February 2015.

Grim Dawn: Ashes of Malmouth DLC is coming out next month. The next expansion to the dark-themed hack-and-slash will introduce new character classes, locations and more.

Crate Entertainment the official release date of Forgotten Gods, a DLC for the 2016 hack'n'slash Grim Dawn. The DLC, announced more than a year ago, will debut on March 27, this year.