A sequel to the successful action RPG created by CI Games - a Polish team behind the development of such franchises as Sniper Ghost Warrior or Art of Murder. Tomasz Gop took part in production of the game as well. He is an experienced gamemaker who had previously worked in CD Projekt RED as a senior producer of The Witcher 2: Assassins of Kings. The Lords of the Fallen series is set in a dark fantasy world, where humanity is forced to face the armies of a fallen god. A group of warriors who have a lot to answer for themselves is sent first to the fight against the tyrant. The player assumed the role of one such fighter in the first installment. Contrary to its predecessor, Lords of the Fallen 2 offers a more extensive plot that aims to spark the interest of a wider group of players. In terms of the mechanics, the sequel is still an action RPG focusing on exploration and arcade combat. Combat itself was additionally extended however, in order to make it feel deeper. As a role-playing game, Lords of the Fallen 2 allows us to choose a specialty and develop the protagonist in our preferred direction.

Lords of the Fallen (2017) is a mobile version of the popular action RPG from 2014 developed by CI Games. The game takes us to a fantasy world ruled by the evil queen Acasha. There are three characters available for the players: Harkyn, Yetka and Kaslo. Our task is to face the queen and save all mankind. In terms of mechanics, Lords of the Fallen for mobile devices has almost nothing in common with its PC/console older brother. The game is much more similar to the famous Infinity Blade. During our adventures we will face our enemies in one versus one combat. We have to tap or swipe on our device's screen to avoid enemy attacks, counterattack, and execute combos. Each of the three heroes has unique equipment and as we progress through the game, we get various resources which then we can use to create new armors or useful amulets. The game features stunning visuals with detailed character models, smooth animations, and numerous light effects. 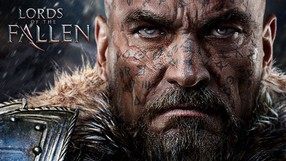 RPG action game set in a fantasy universe. Lords of the Fallen is a collective work of Deck 13 and CI Games. The story invites you into a world where the mankind once rebelled against the tyranny of a cruel god and managed to bind him to mountain range. Thousands years later the evil grows in strength again, and the only one able to stop it is a hero who is not clean of vice himself. The character controlled by the player represents one of three classes, following a path of weapon or magic. As befits an action RPG, Lords of the Fallen focuses around spectacular combat against diverse opponents. The game is powered by the Fledge Engine.