Among Us has become a very popular. Although a small studio is responsible for it, the number of active players could put many AAA titles to shame. Unfortunately, apart from players and devs, also hackers are interested in the game. A powerful spam attack in the game's lobby has been continuing for several days now and forced InnerSloth to quickly develop security patches.

Strange content started to appear during when playing online. The players noticed some entries on the lobby chat that were not their work. Although they themselves looked as if it was the people taking part in the match who entered them. These messages differed from each other to some extent, but they contained some elements that were always present. The name "Eris Loris", a link to a Discord server or YouTube account, and a slogan promoting the current US President, Donald Trump, were repeated. Sometimes they also contained a threat of damaging the user's device if he or she doesn't follow the instructions contained in the spam message.

It quickly turned out that the person behind the attack was a hacker known as "Eris Loris" (am I the only one who thinks this is a reference to the famous "Lorem Ipsum" placeholder?). For this purpose, he uses automated bots that use the game's vulnerabilities to post spam. Eris actually owns the Discord server and YouTube account, to which the links present in the messages lead. You can read his comments and answers on Discord. According to him, 1.5 million matched in Among Us were attacked and 4.9 million players were affected by spam. He also claims that he is helped in the attack by several people who shared their servers to "add power" to the project. 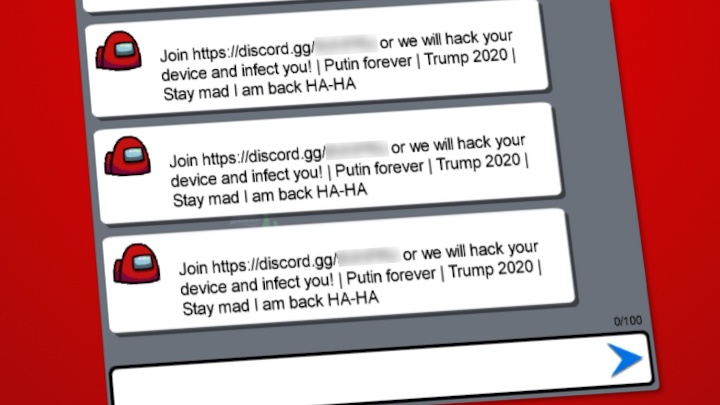 This is the look of spam visible in the game lobby

The game's developers have published a message on Twitter, in which they confirm that they are aware of the problem and working on a security update. Of course, the spammer was eager ti comment on their message in a mocking way, as you can see in the screenshot below. The unwanted messages mention the president of the USA, but it doesn't mean that the author of the spam is his supporter; he just found it funny (and now Putin also appears in the content). Eris is a hypocrite, he admitted that he plays Among Us with his friends. However, it doesn't stop him from spoiling the game for other players, he doesn' t feel any remorse about it. 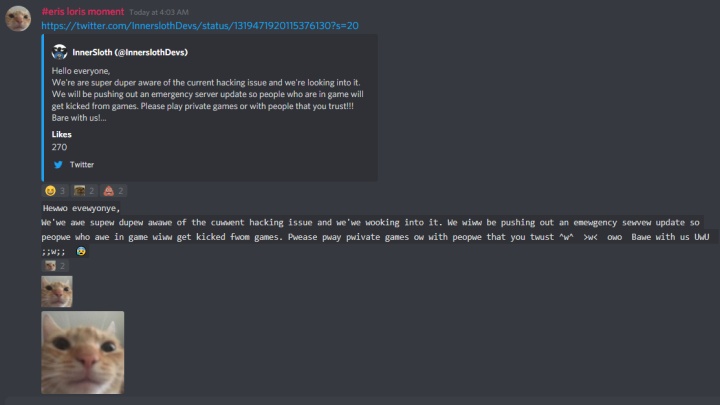 The hacker's reaction to InnerSloth's message

The rather controversial mentality of the person behind the attack, as well as the very fact of making life difficult for the players, caused a strong community reaction. People started to flooding Eris' recordings with thumbs down and report his content to the administration. What's quite worrying is that the comments published on YouTube show that some people may be in possession of hacker's personal data and home address.

InnerSlotch updated servers to increase security and eliminate spam. The devs also insisted in their messages to play only with our friends for now. Eris claims that he has already cracked the patch. As you can see on the screenshots published by users, spam still appears. Interestingly, now also from users without visible name.

Although the blame for the whole situation lies is a certain, known person, it's impossible not to pay attention to the fact of insufficient security of the game itself. Unwanted messages are not the only problem associated with exploiting gaps in the code. The players also report other problems. There are known cases of killing impostors, using wallhacks, players spawning outside the starting room, or hackers teleporting, which can end up in a ban on the server. Perhaps the developers didn't expect such popularity of Among Us, hence some of its mechanics were not prepared for this. However, as one of the developers writes, InnerSloth is close to introducing effective solutions that will improve game¹s security.

Patch Reduces Loading Times in The Last of Us Remastered

Lynch is Preparing a New Show for Netflix

Sony Blocks PS5 for Selling Access to PS Plus Collection

Impressive Geralt Figurine From The Witcher 3 Available for Pre-order

Cyberpunk 2077 and Save Game Data Transfer Between Consoles