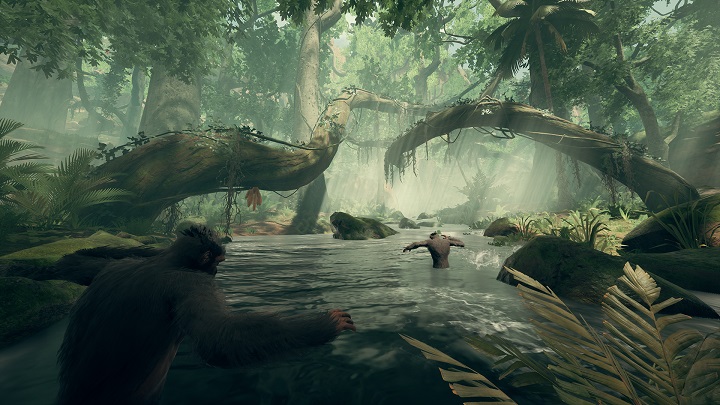 We got a lot of new materials on Ancestors: The Humankind Odyssey.

Third part in a series of short trailers for The Humankind Odyssey has just appeared, in which the game;s creative director, Patrice Desilets, discusses game mechanics. The one, released today, was entitled "Evolve" and we can learn from it how the RPG elements in the game look like. Players will be able to create their own unique evolutionary paths based on the decisions they make. Depending on how we lead our character, we will be able to use different skills.

In the previous two videos we learned about the mechanics of survival, ways to expand the clan, or what dangers await us in the game. All three episodes can be seen below.

In addition, a 17-minute gameplay from the game appeared on the web. We can see the initial fragment of Ancestors: The Humankind Odyssey. We begin our adventure as a young monkey who is forced to hide from predators. Then we switch to another member of the clan, who goes in search of the missing toddler. In this way we get to know a lot of mechanics that are in the game and we can see exactly how the production looks like. The whole thing you can be watched below.

Ancestors: The Humankind Odyssey will be released on PC (Epic Games Store only) on August 27, this year. The title is also intended for PlayStation 4 and Xbox One consoles, and the release of the version for these devices will take place in December.