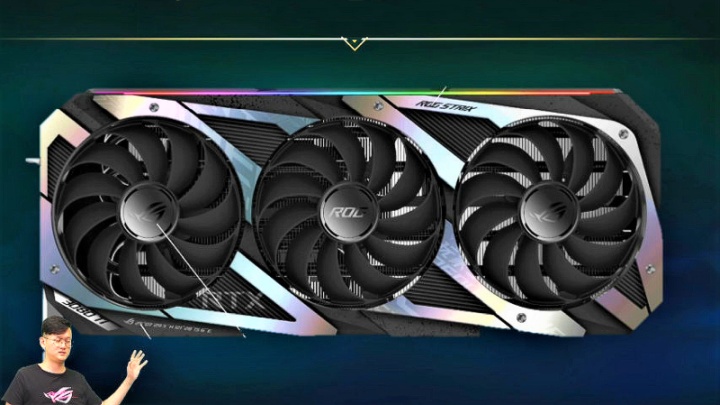 Is this the new RTX 3080 Ti from Asus? Source: VideoCard

VideoCardz has published a leaked photo showing what is likely to be one of the future Asus models from the ROG Strix series. It shows markings that suggest it may be an RTX 3080 Ti chipset. It may be the first photo of a custom GPU of from Nvidia's Ampere generation.

The picture most likely comes from Asus' inside verification. Such information was obtained by VideoCardz. It proves the authenticity of the photo, but it may represent one of the early versions. It is possible that a different design will eventually be chosen.

The picture shows the cooling of the new Asus card. Three large fans and a powerful heat sink hidden underneath. Six heat pipes pass through rows of ribs. As far as the appearance is concerned, the design adopts black theme decorated with aluminum (or its imitation). Perhaps the cards will also have some kind of RGB, but nothing is known about it at present.

One curiosity is the name of the card itself in the leakad photo. There is unconfirmed information that RTX 3080 Ti may be the real name of the RTX 3090 cards from earlier rumors. Does this mean that Nvidia will retain the previous name? Many questions arise, and the answers will only come with time. We have to wait a little bit longer for the official information from Nvidia and the release of the cards.

Iron Harvest on a two-hour gameplay